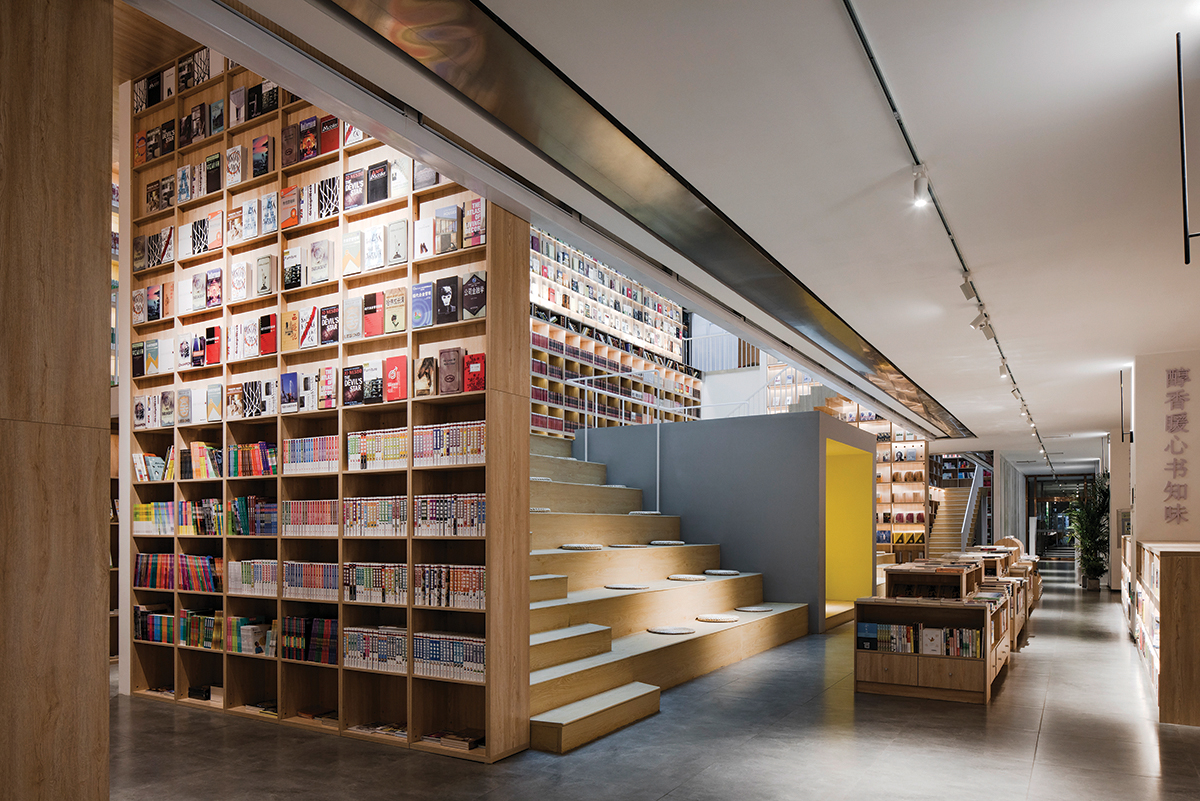 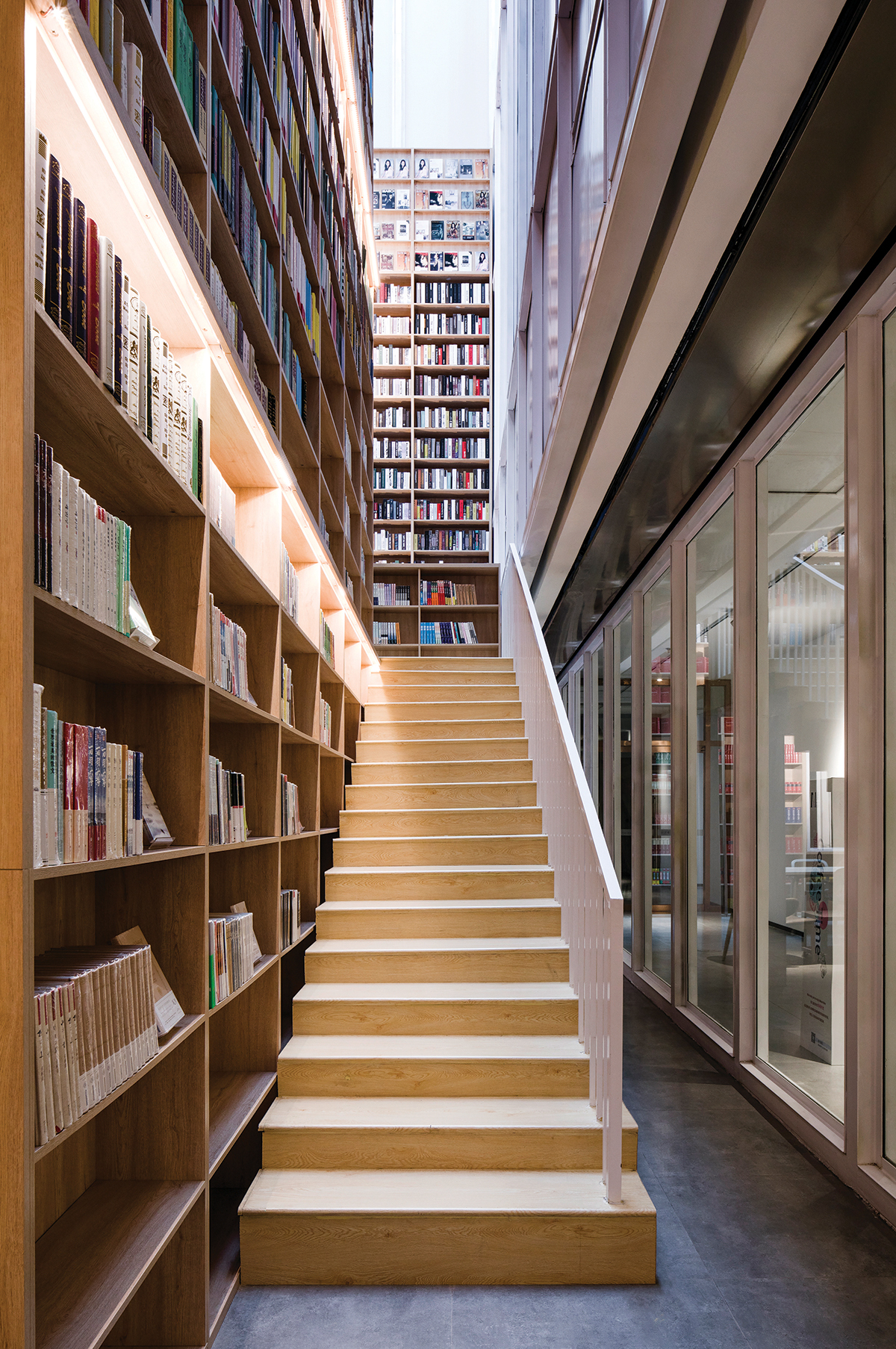 The project is a bookstore located at the intersection of Bohai Road and Yanshan Street in Renqiu city, China. Situated in the central area of Hebei Province, Renqiu is within the Capital Economic Circle and the Bohai Economic Rim. The building where the bookstore is set has 24 floors in total, with 1F-5F serving as a mall, 6F-18F occupied by a hotel, and the remaining floors above used as workspaces. The occupancy rate and operation of the hotel have been satisfactory, but the performance of the commercial space beneath was poor. As we first met, the client was unsure on how to transform such a commercial space. However, we saw the company's determination in making a holistic adjustment and change to reactivate the entire mall and show the market with a brand-new image. After several meetings, we thoroughly analyzed the existing business types such as retail, catering and recreation in the mall, and decided to remove the floors and business formats that were not performing well while inserting new types of business into it. On the other hand those commercial forms that are performing well such as catering were retained or slightly renewed. The client hoped us to reshape the space with minimum investment and cost. 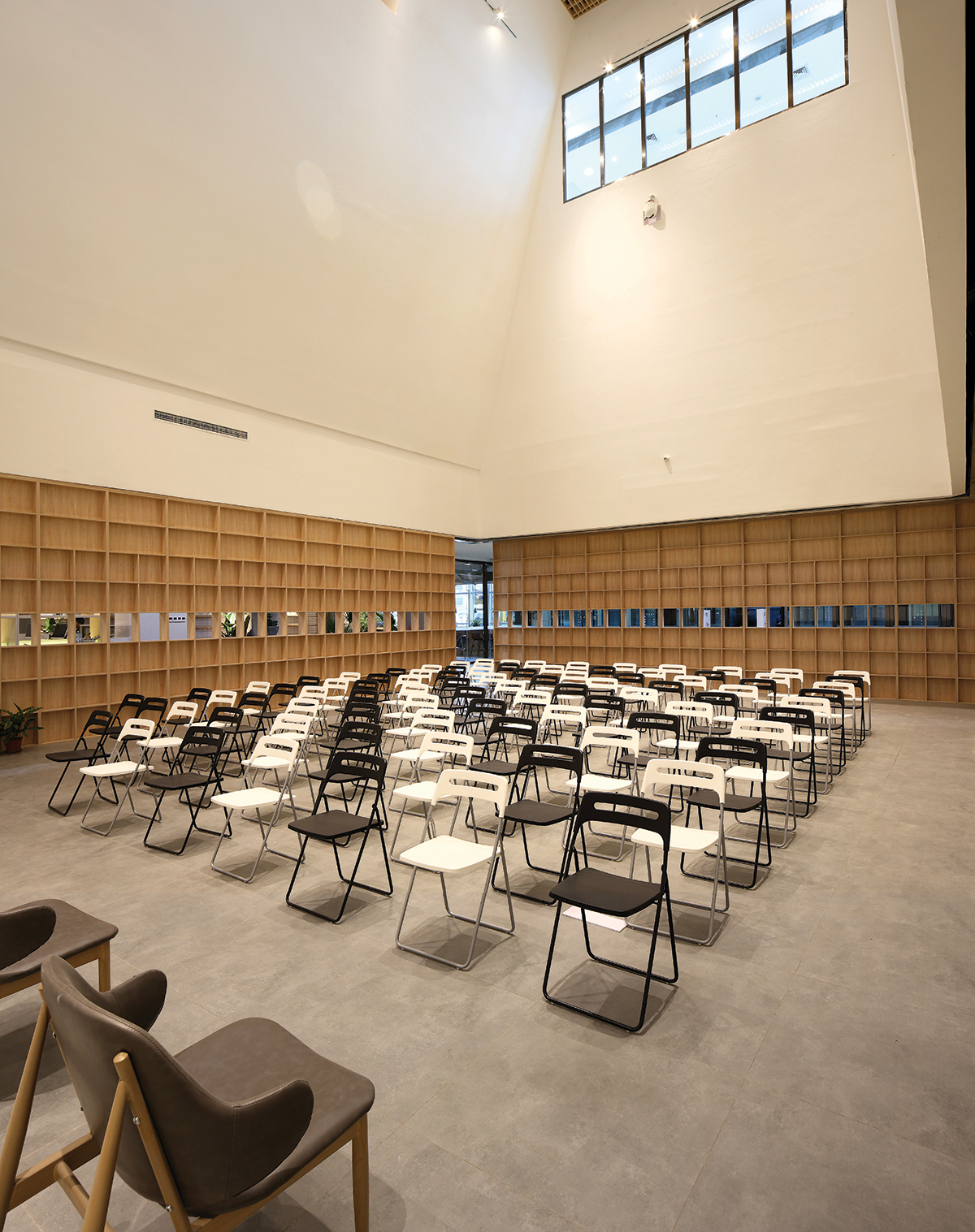 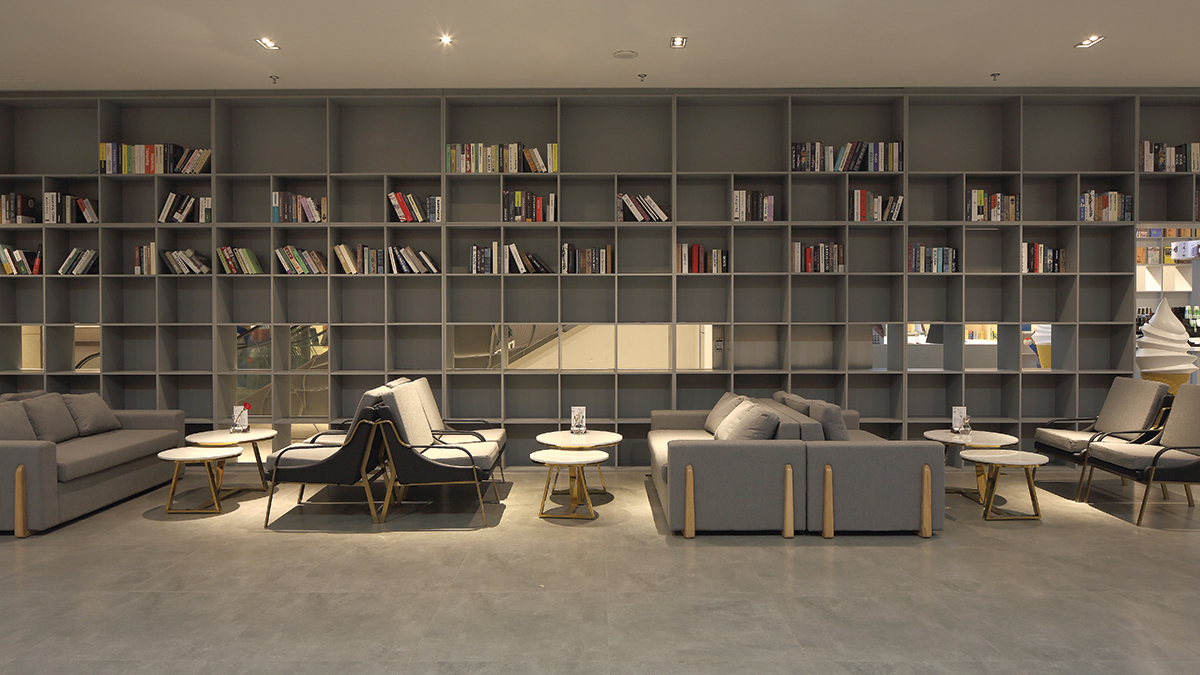 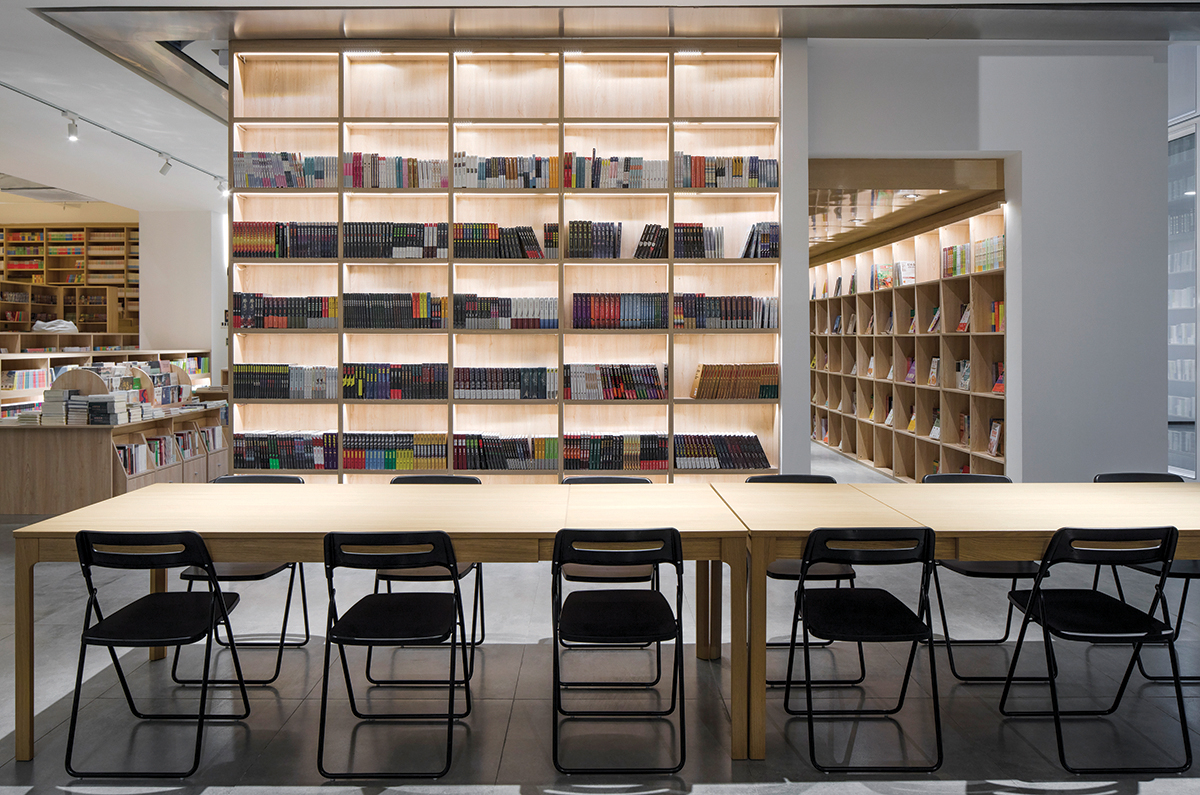 Firstly, we embedded a bookstore into the space of two atriums. It links up the 1F and 2F floors through different levels of stairs, hence forming a vertical circulation route to walk around and explore between both atriums while creating rich, playful visual effects and experiences within the limited space. At the same time, we reorganized the circulation route of the entire mall to enhance its accessibility and functionality. The 2nd floor was originally a children's playground, which was redesigned and upgraded on the premise of retaining its original entertainment functions. For the 3rd and 4th floor, the catering space, which had been performing well, was retained. The banquet hall on 5F was reserved as well. However, there was no escalator directly connecting 4F and 5F, which could be merely reached by fire emergency stairs. This could easily cause congestion when crowds gather during a banquet, so the client asked for a direct vertical route that can leads to 5F. Based on analysis, we decided to add an aerial staircase above the atrium. It perfectly solved the problem, at the same time enhanced the sense of layering and structure of the space. 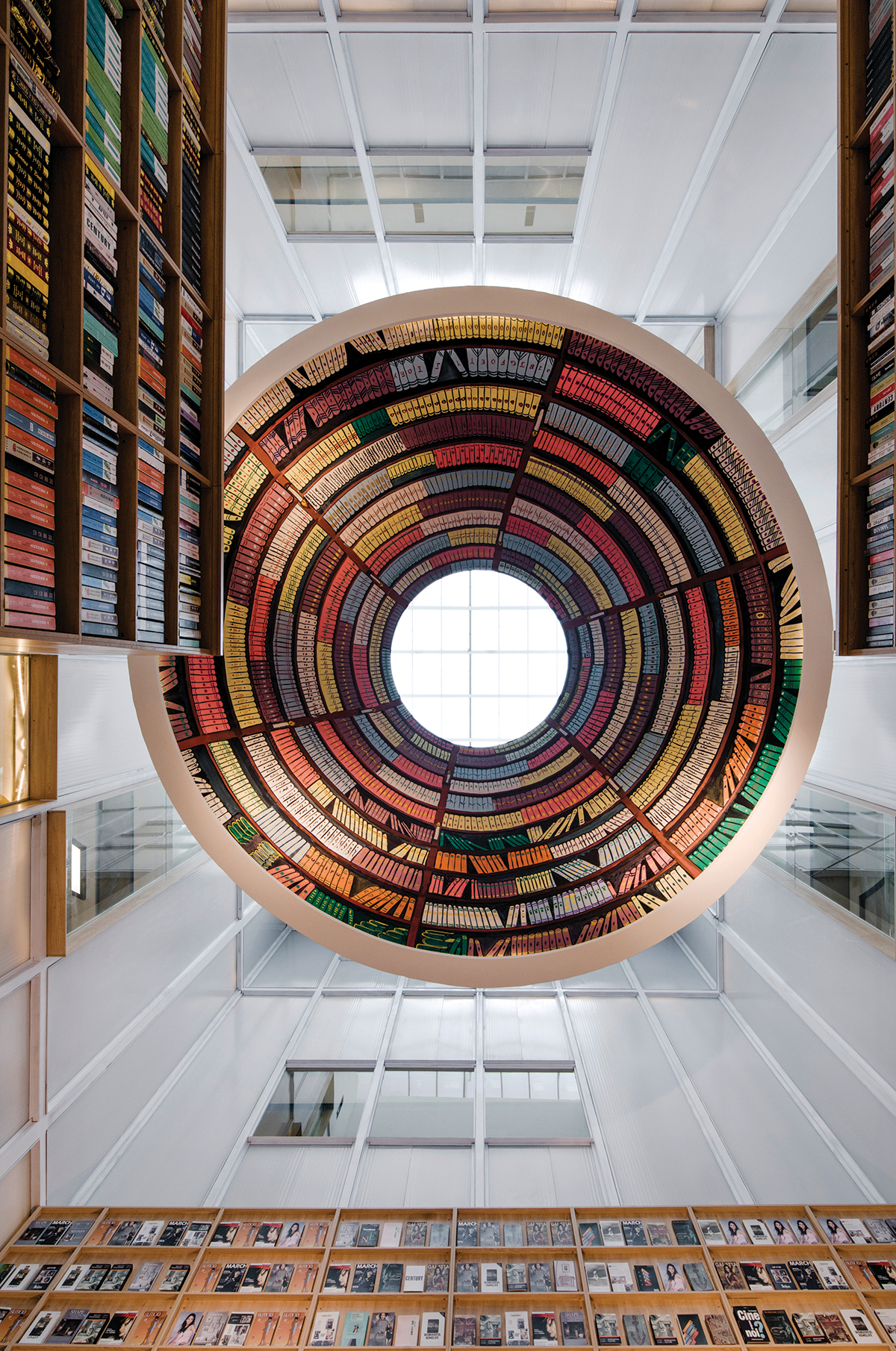 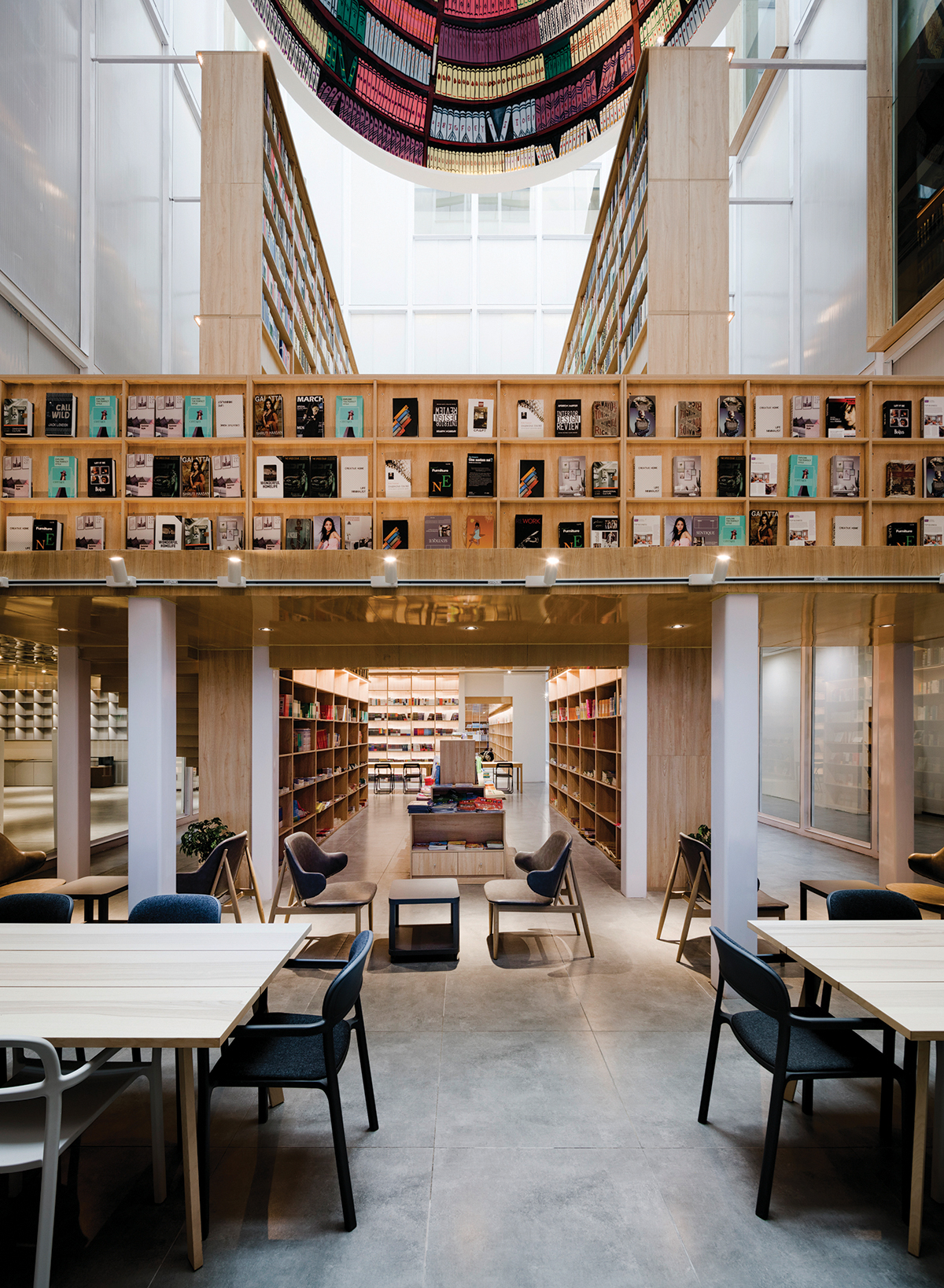 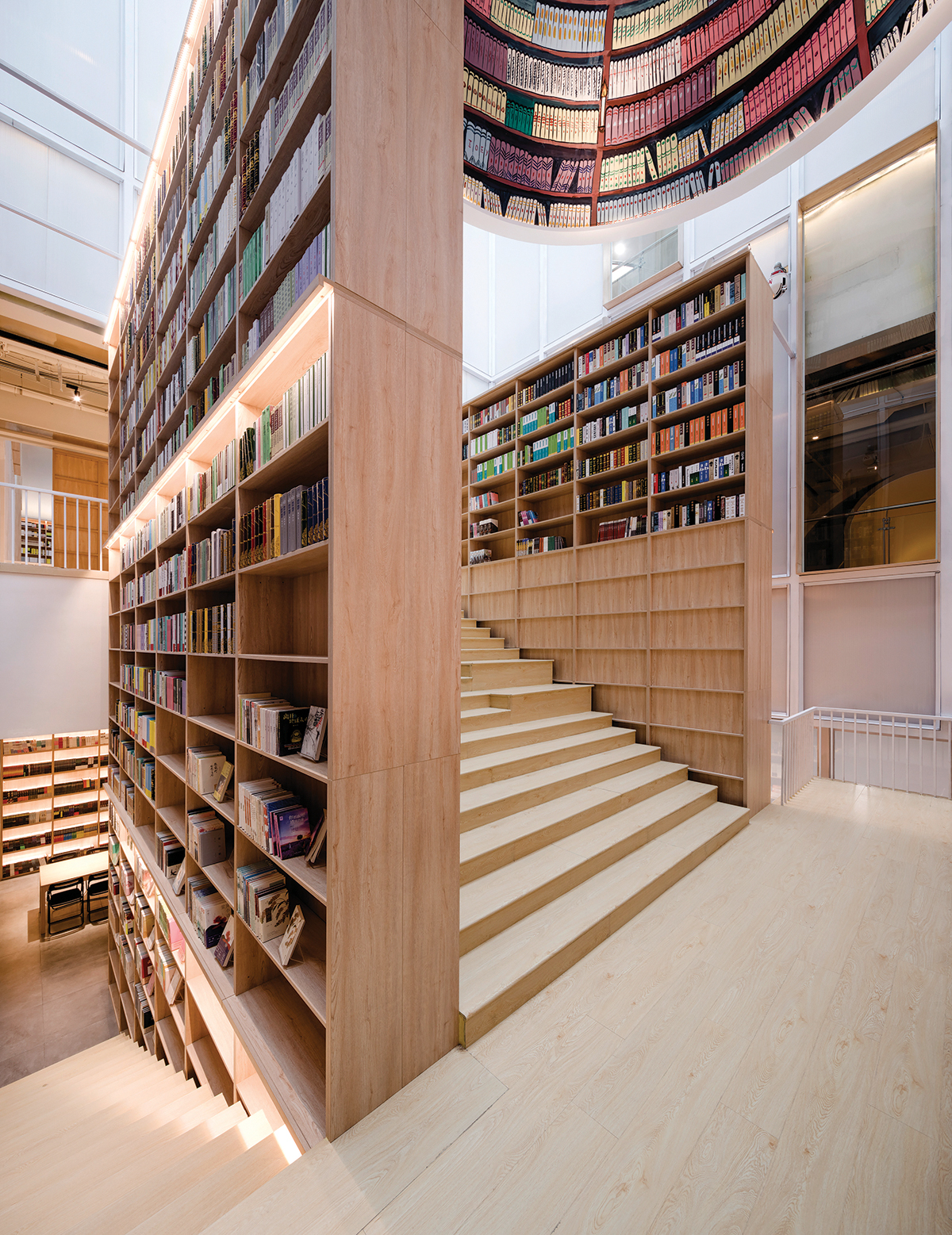 With regard to the idea of inserting a bookstore into the atriums as the core of the mall, there were different opinions among parties involved in the project at the beginning. The common consensus was that bookstores were hardly profitable and there were certain operational risks after investing a lot into them. However, we thought that the bookstore should not only be viewed from the perspective of profitability, as it can have certain spiritual and cultural attributes. This bookstore can even be an extension of a city or a community, and become a space that carries the memory of the local people. From a commercial point of view, we believe that it can also create possibilities for inserting new business types into the mall as well as divert customer flow to its surrounding commercial spaces, hence enhancing the integration, relevance and cultural ambience of the entire mall. Since the whole shopping mall is a private-owned property owned by the client, the significance of the bookstore should not merely be measured by the profitability of itself, but also by the coordination and balance of the overall commercial layout of the mall. 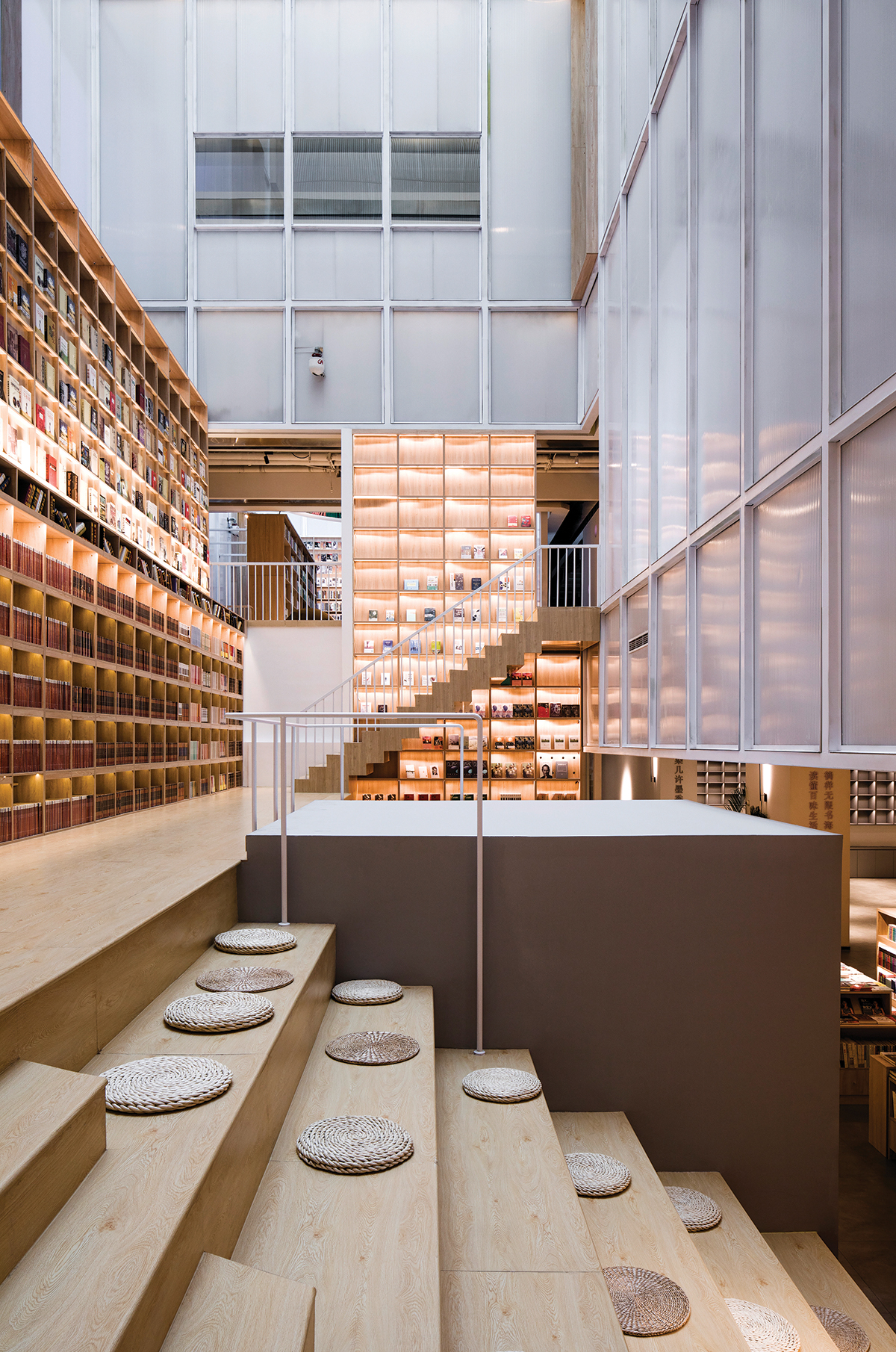 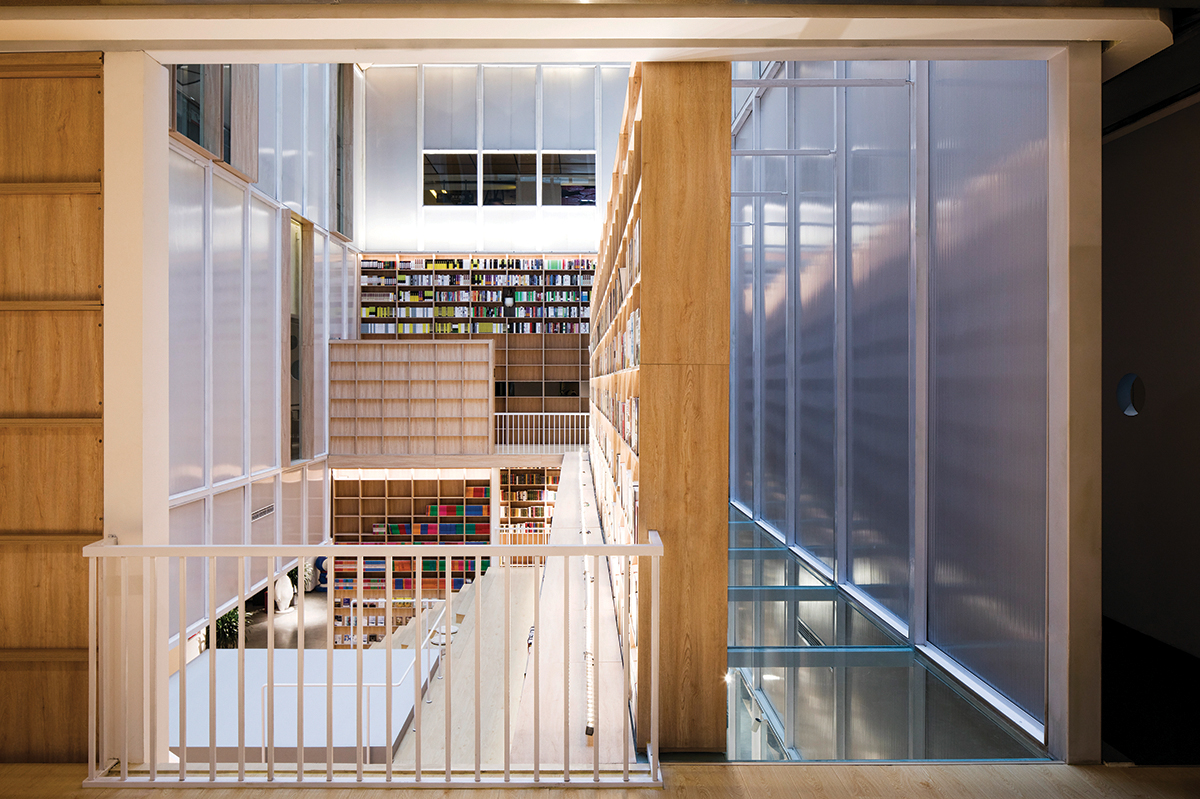 Meanwhile, we agreed with the client's proposal that spatial appropriation, scale and cost should be
allocated and controlled in a reasonable manner. After several rounds of discussions, the client decided to allocate two of the daylighting atrium spaces for the bookstore. We took the bookstore as the core of the first floor space and linked up the lobby bar, cafeteria, children's reading area, multifunctional exhibition hall, new-style Chinese restaurants and other related types of business in the mall. Originally, the atriums and corridors were in an open state, but considering that the newly inserted bookstore requires a quiet atmosphere, we used polycarbonate panels to envelope the space to prevent interference from surrounding spaces. Meanwhile, with a view to avoiding the oppressive feeling and sense of monotony caused by the isolation, we made some changes and adjustments to the form and segmentation of the envelope. The atriums are topped with a perforated aluminum ceiling, which filters sunlight, hence enriching light and shadows as well as ambience within the space. 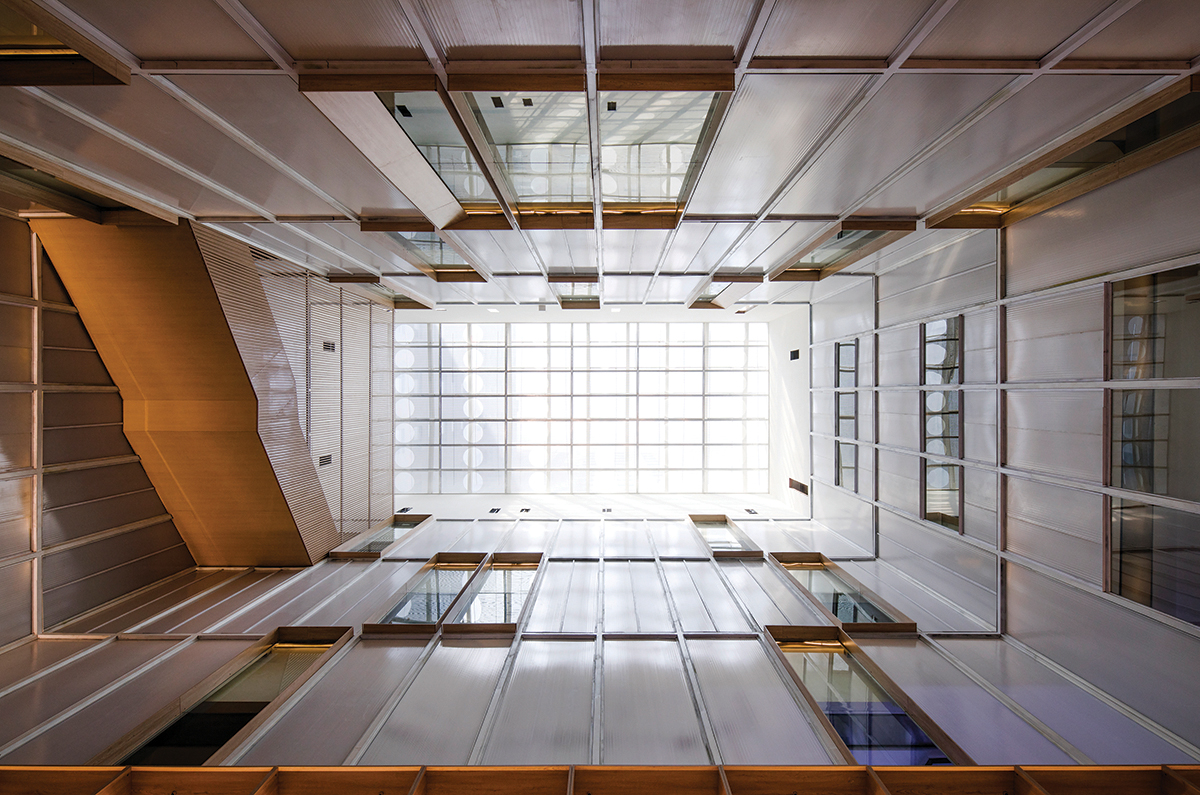 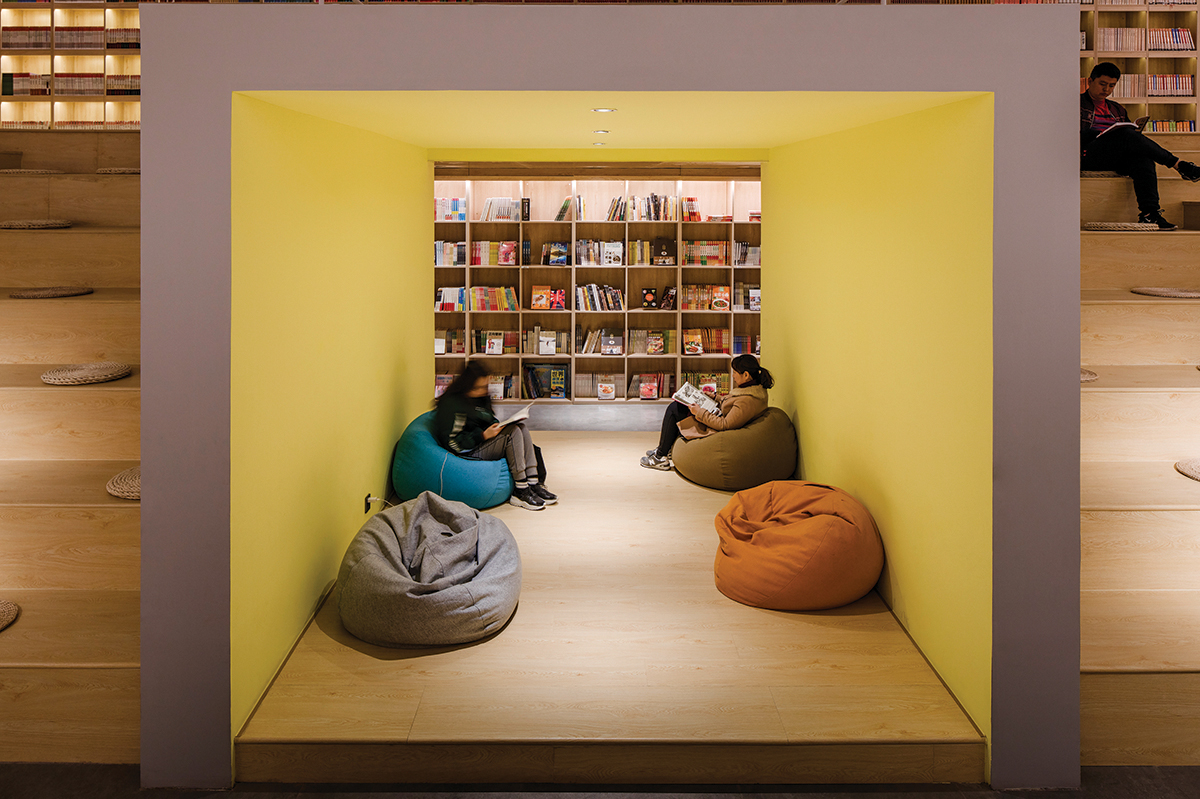