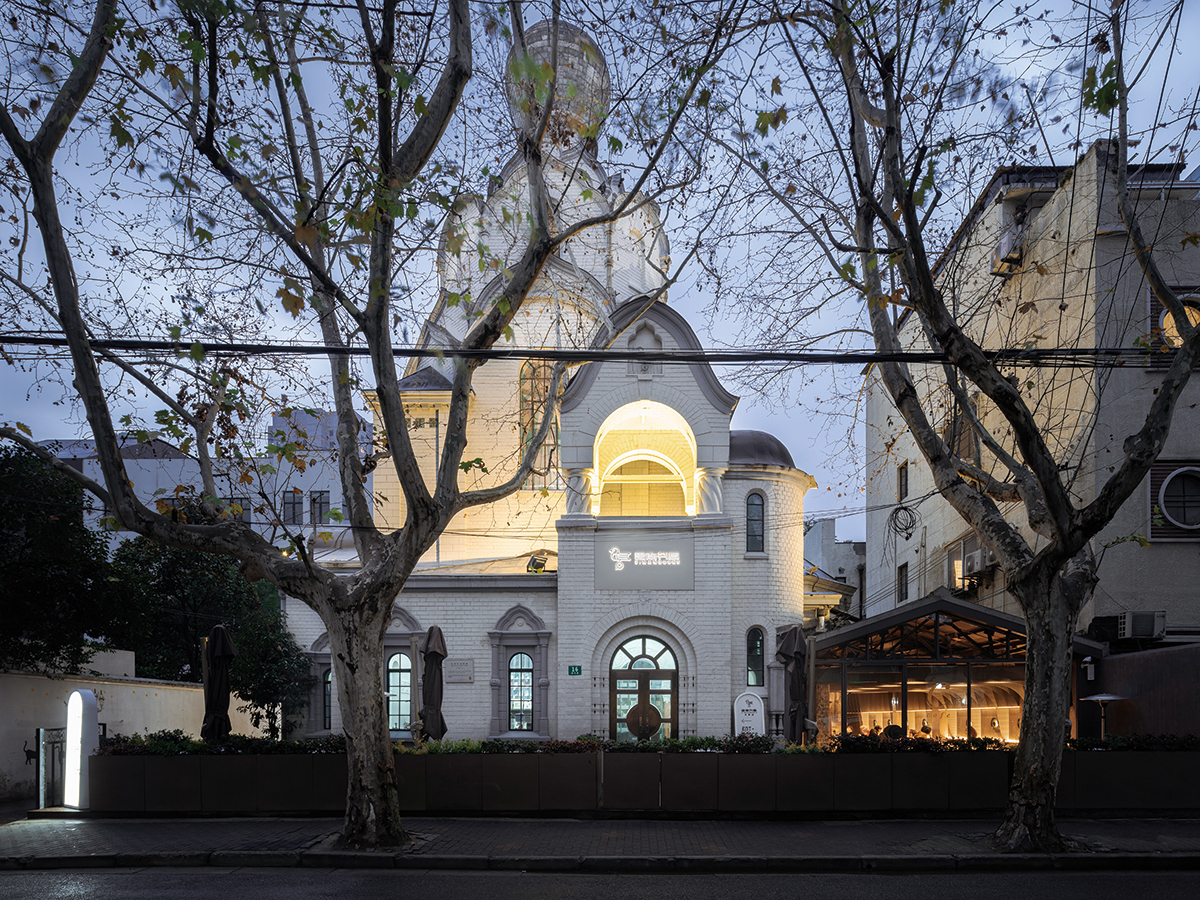 Wutopia Lab has completed Sinan books poetry store with the concept of ‘Church in church’ , using 45 tons of steel in the historic site of St. Nicholas Church in Shanghai. As the largest professional poetry bookstore in Shanghai, it offers 1000 poetry books in different languages. A continuation of Wutopia Lab’s design style, magical realism based on antithesis, perforated steel plates, translucent, uncertain light, color and dramatic poetry could be found in the poetry store. The former orthodox church at Gaolan Road #16 is the second batch of outstanding historical buildings in Shanghai. It was built in 1932 and was not used as church for a long time. In the past few decades, it was an office, factory, warehouse, canteen, residential place, and later became a club, restaurant, and finally was in a waste. The first time when I stood in the site, I felt it like a ruin of maze. But after accustomed to the darkness, with the knowledge of architecture and urban historical experience, I can identify the traces of construction that have been gaining from generation to generation since the beginning. Various traces of the addition and decoration of this old church at different times are squeezed together and integrated as ones. The entire project can only be implemented under the permission of the Shanghai Historic Building Protection Affairs Center. No existing façade, structural system, basic floor plan and distinctive interior decoration of the building could be changed. The façade and layout, new and characteristic decorations on wall and dome cannot be changed as well. It is required to remove the unnecessary walls and floors, such as the steel structure interlayer built in the 1990s. The building space should be cleaned up to reveal its original image and keep the height of the main hall. Shorten the build-on part at east side, aligning to the original part.Tracing the original materials, such as pillars, floral decorations, walls, and flooring. After decades of wearing down, only concrete layer were left in the main hall. A small part of aged stone floor was discovered in the side hall, while others were terrazzo added in the 1970s. After repeated grinding and cleaning of the floor tiles, the oil pollution was still faint and it was regarded as the memory of the factory and persisted. 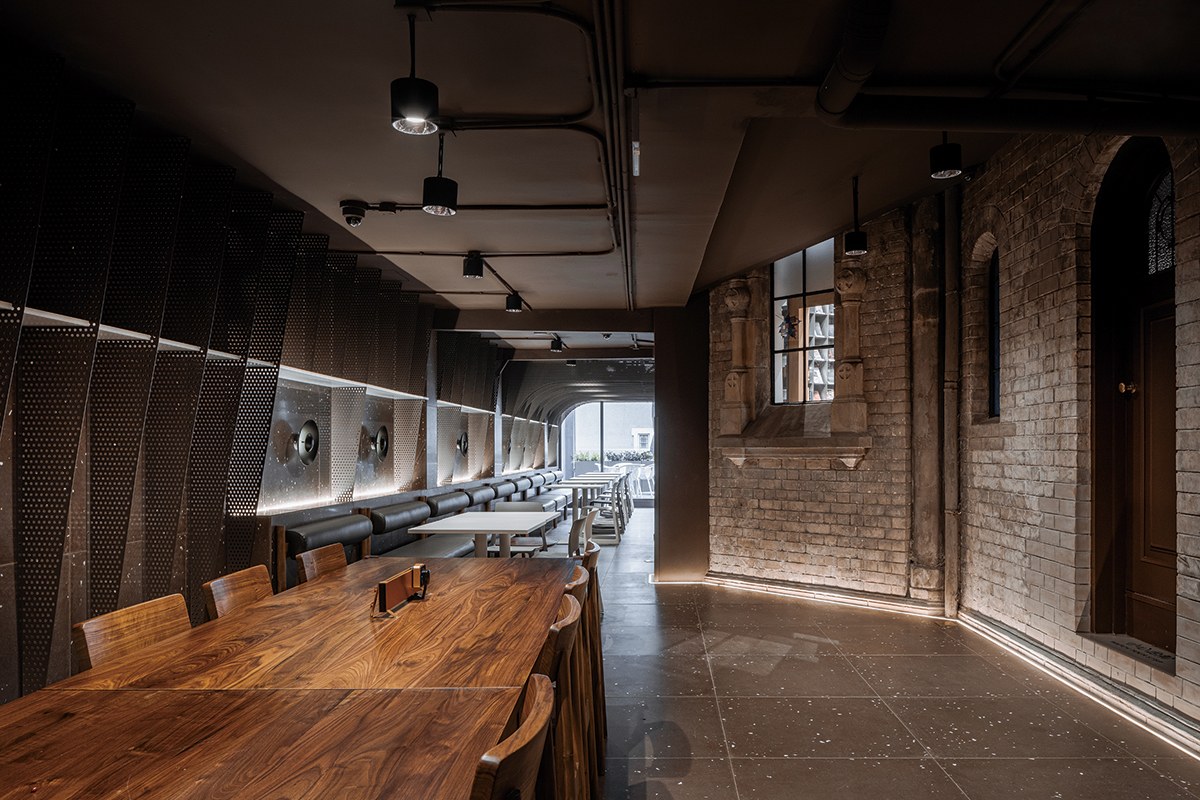 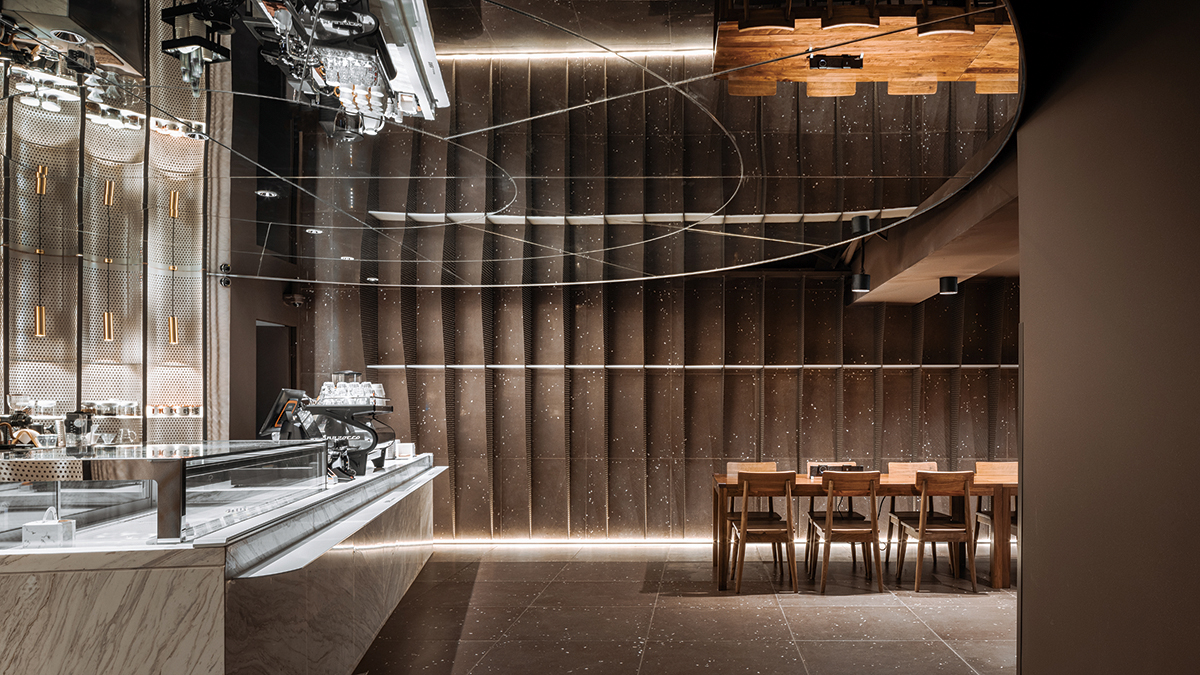 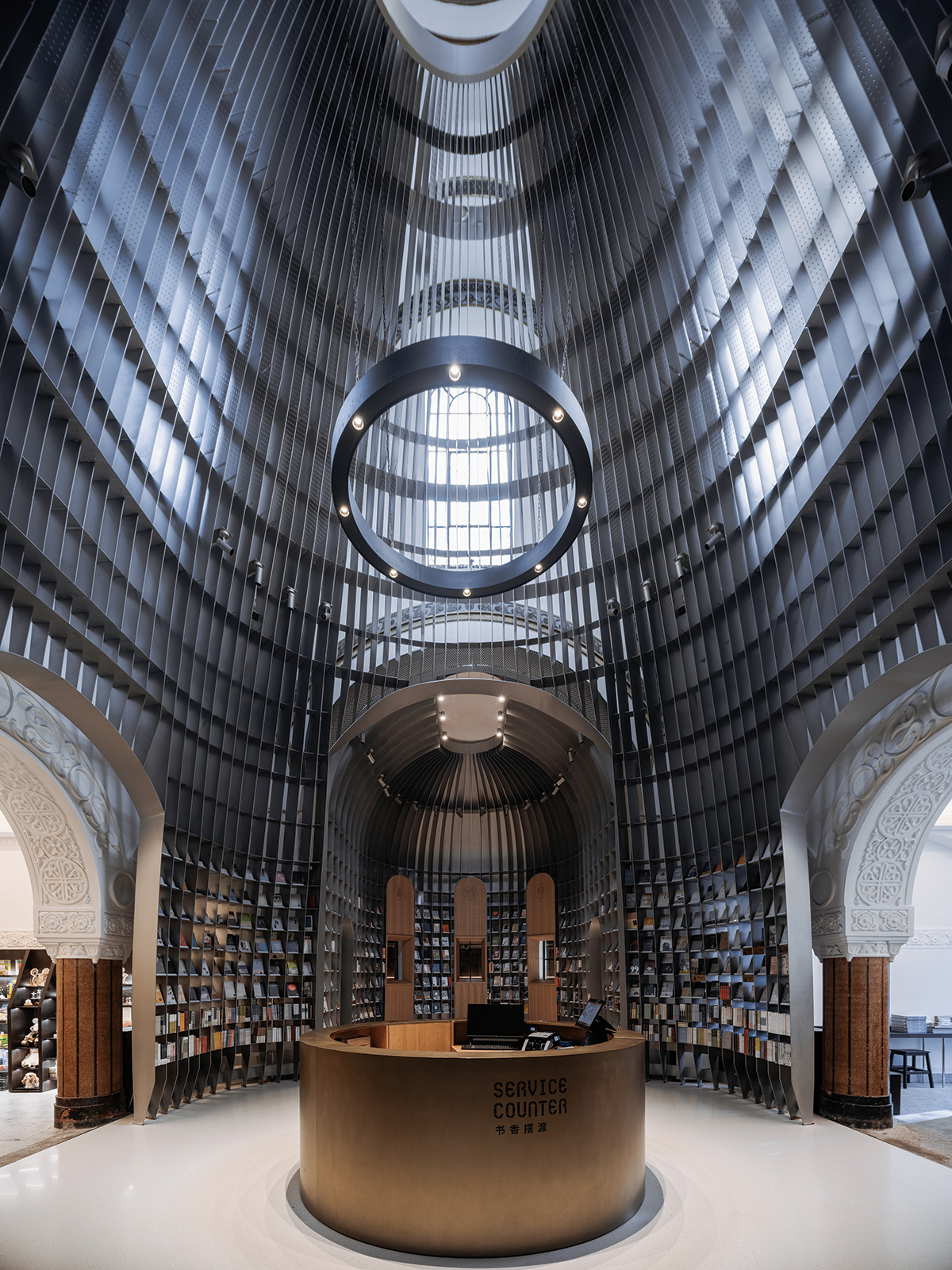 I believe that the poetry bookstore should be the sacred space of the city of Shanghai. It should have an independent spirituality and should not be based on the religion of the old site. Given the fact that the dome could not be transformed, I used bookshelf to create a new structure as a Church in the old building Church. This is Church in church, a sanctuary for modern people was born in where once a sanctuary of faith. I chose to use plated steel plates other than the stone in old site. The partition and stand of the bookshelf are welded as a steel plate grid system. They interact with each other to form an inner space—a poetry bookstore. The bookshelf has no back panel, and the light from the dome can still spill into the bookstore. Different traces from 1932 to 2019 on the wall are faintly revealed through the bookshelf, including the Catholicstyle frescoes that the owner asked the students of the Academy to draw when the group was used as a restaurant in the early 2000s. The steel bookstore and masonry church became a new integrate. 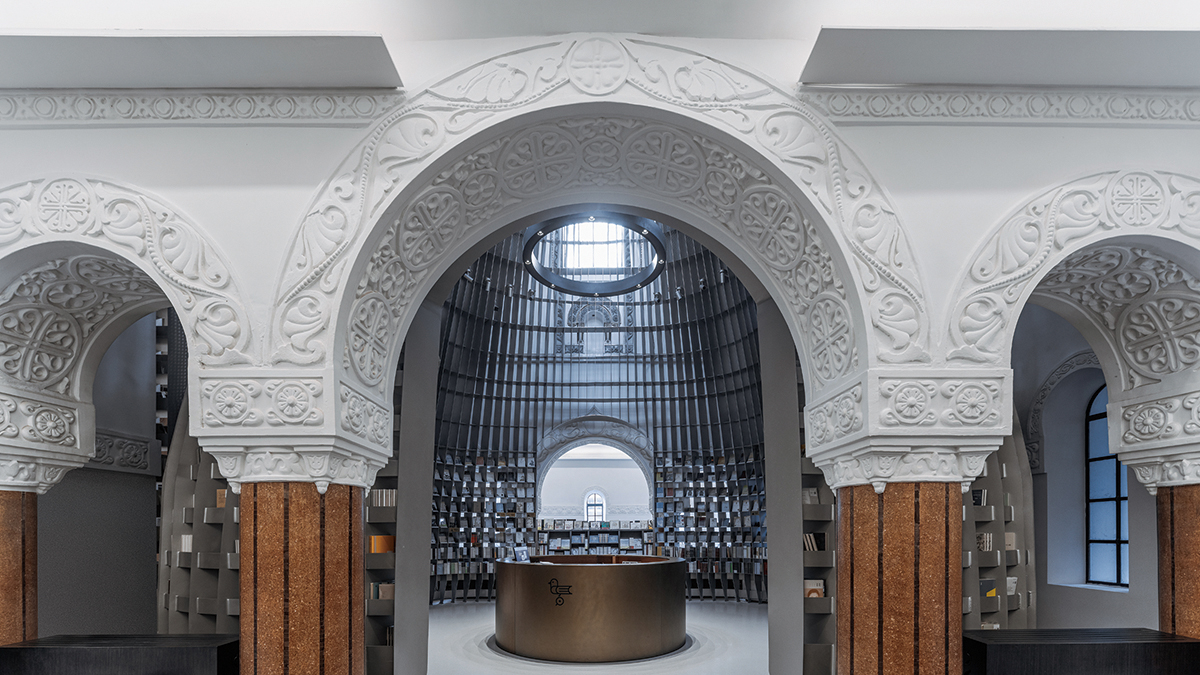 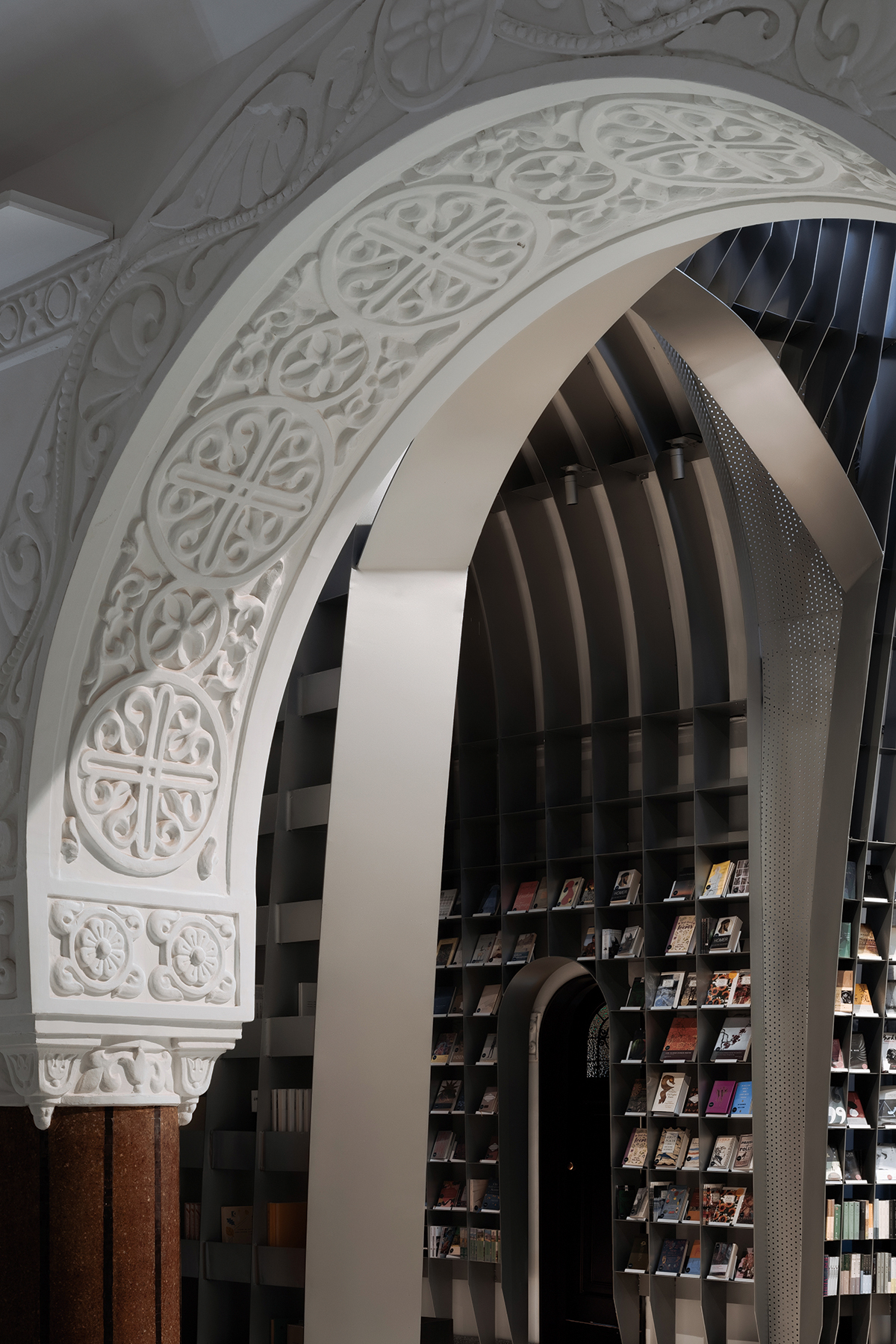 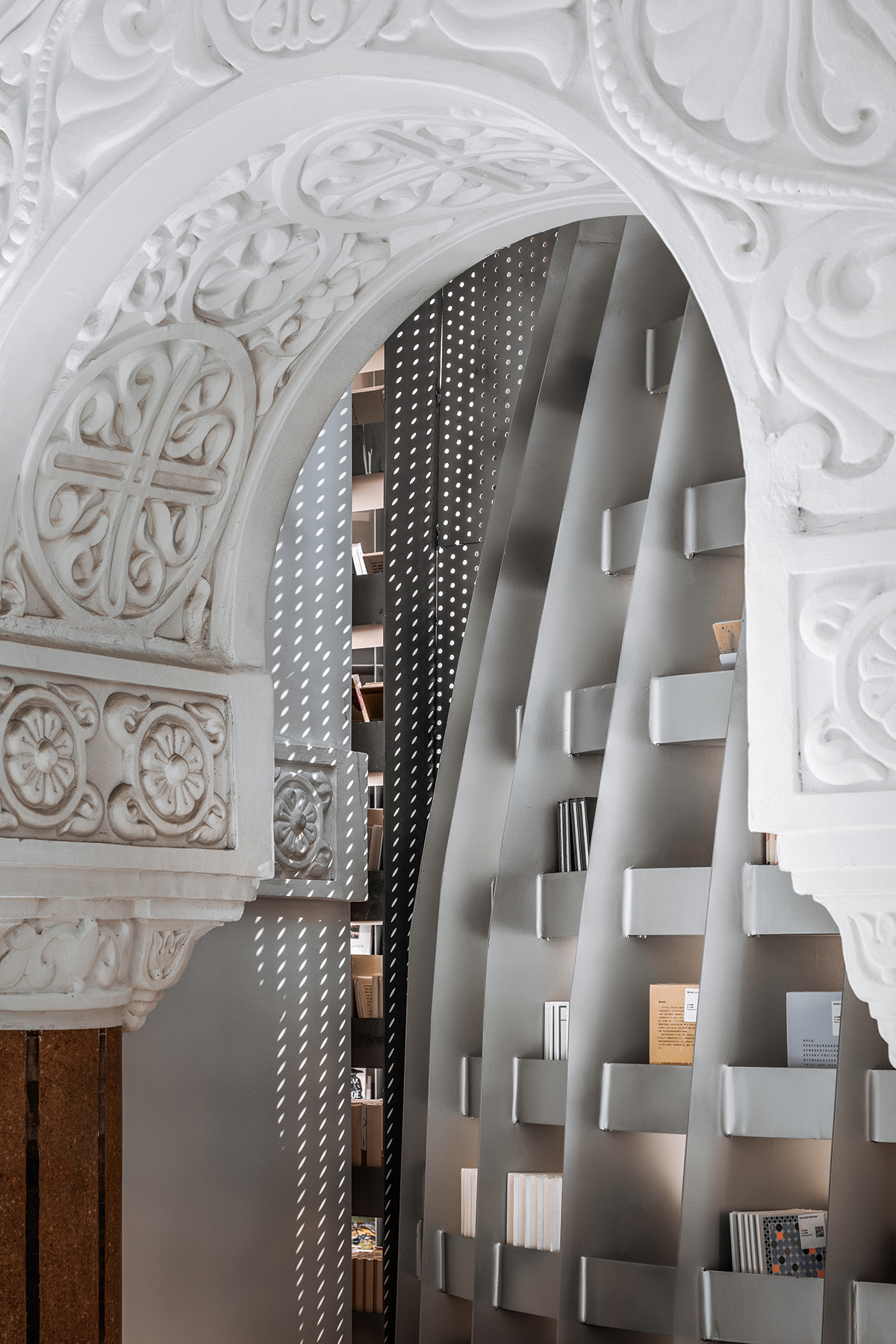 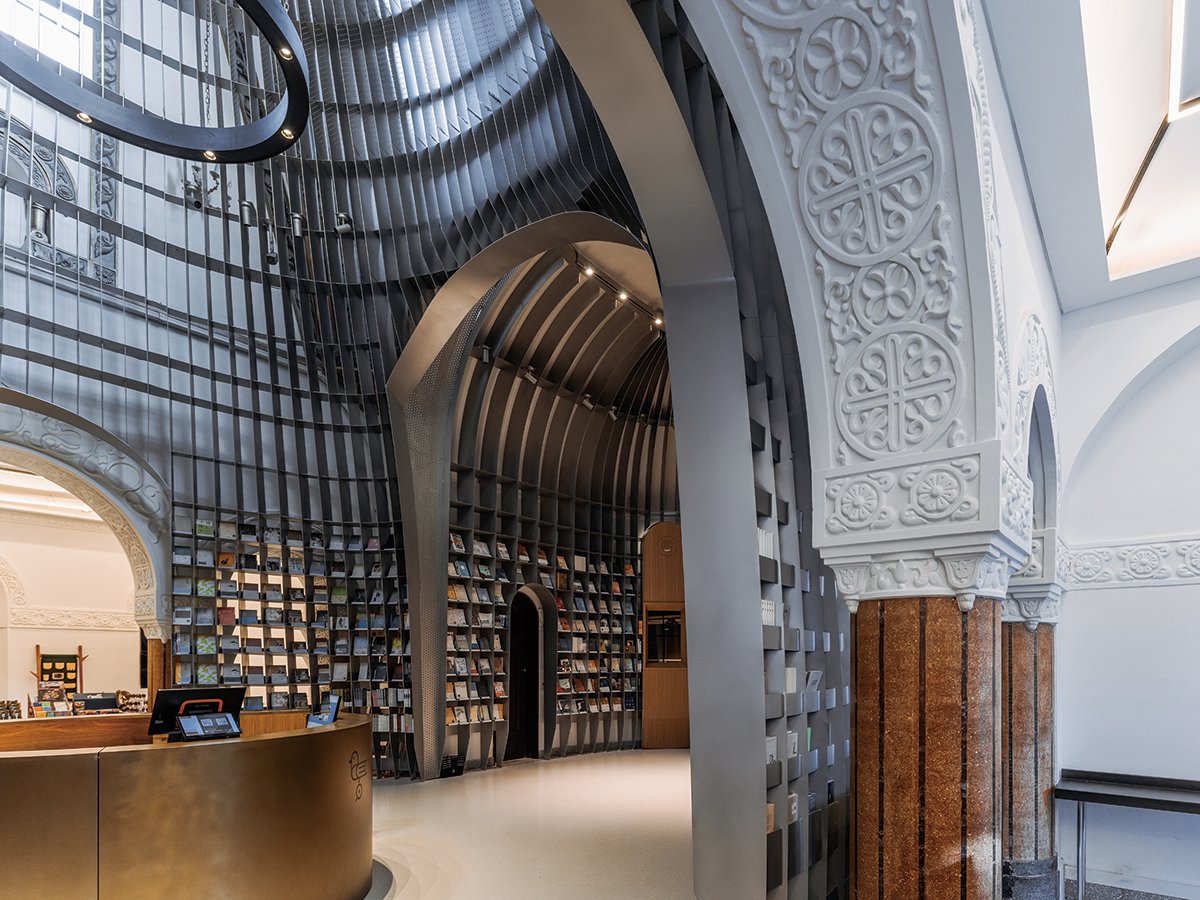 With light strips on wall, readers could figure out the original outline of the church and tell which part is newly add-on. East and west part of the church was transformed into a café. Contracting to the silver metal bookstore, I used chocolate color to make the café a mild and cozy atmosphere. The bookstore is an interior project that does not involve the preservation and renovation of the facade. We tested on the wall by the side of café, which is an inner wall but basically an outer wall, to see if there are layers of paints covering on the wall. After peeling off layers of paints, the texture and vicissitudes of 1932 were finally revealed. I chose blue film to replace the faded color window. An infinitely transparent blue is rendered when sunlight spilling into the side hall, dissolving the physical sense of the side hall and highlighting the brightness of the main hall. The steel bookstore was built by 30 workers in 80 days. Workers must first cut 5 mm steel plates into 128 standpipes, 640 large steel plates and 2921 small steel plates for 23 layers of crossbars according to the drawings. After pre-assembled correctly outdoor, the pieces were moved inside and welded together. Finally, this bookstore of 388 square meters and a height of 9.9 meters was methodically formed left a 50 cm gap from the old wall. In the silver bookstore, a balcony was transformed into a golden pulpit. Here you can see how the steel bookstore and the old masonry church are interwoven without touched. The poet should recite aloud in this noble place. “when people come to the world, if they can not make others better, they will make them worse.” - Eliot 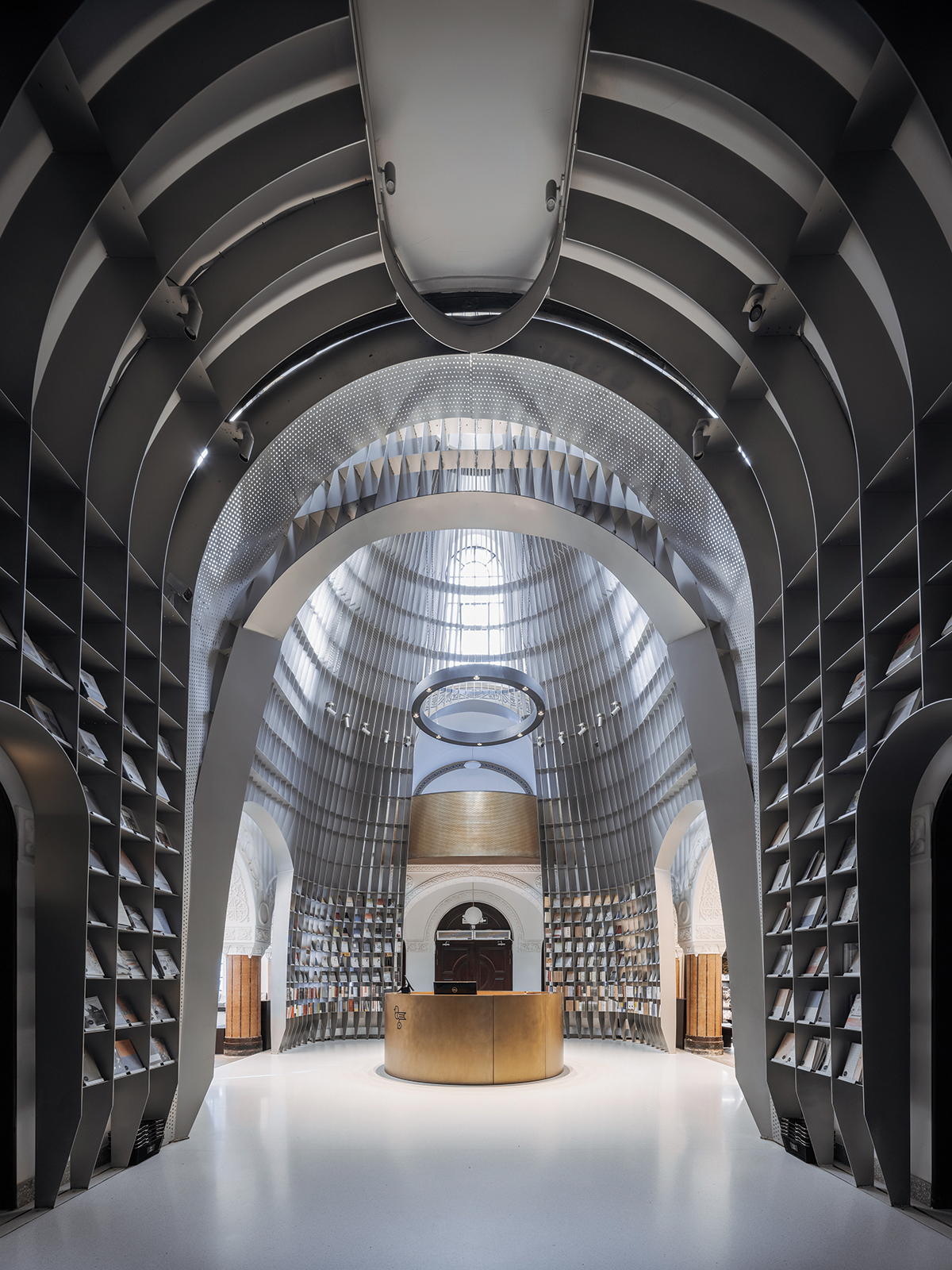 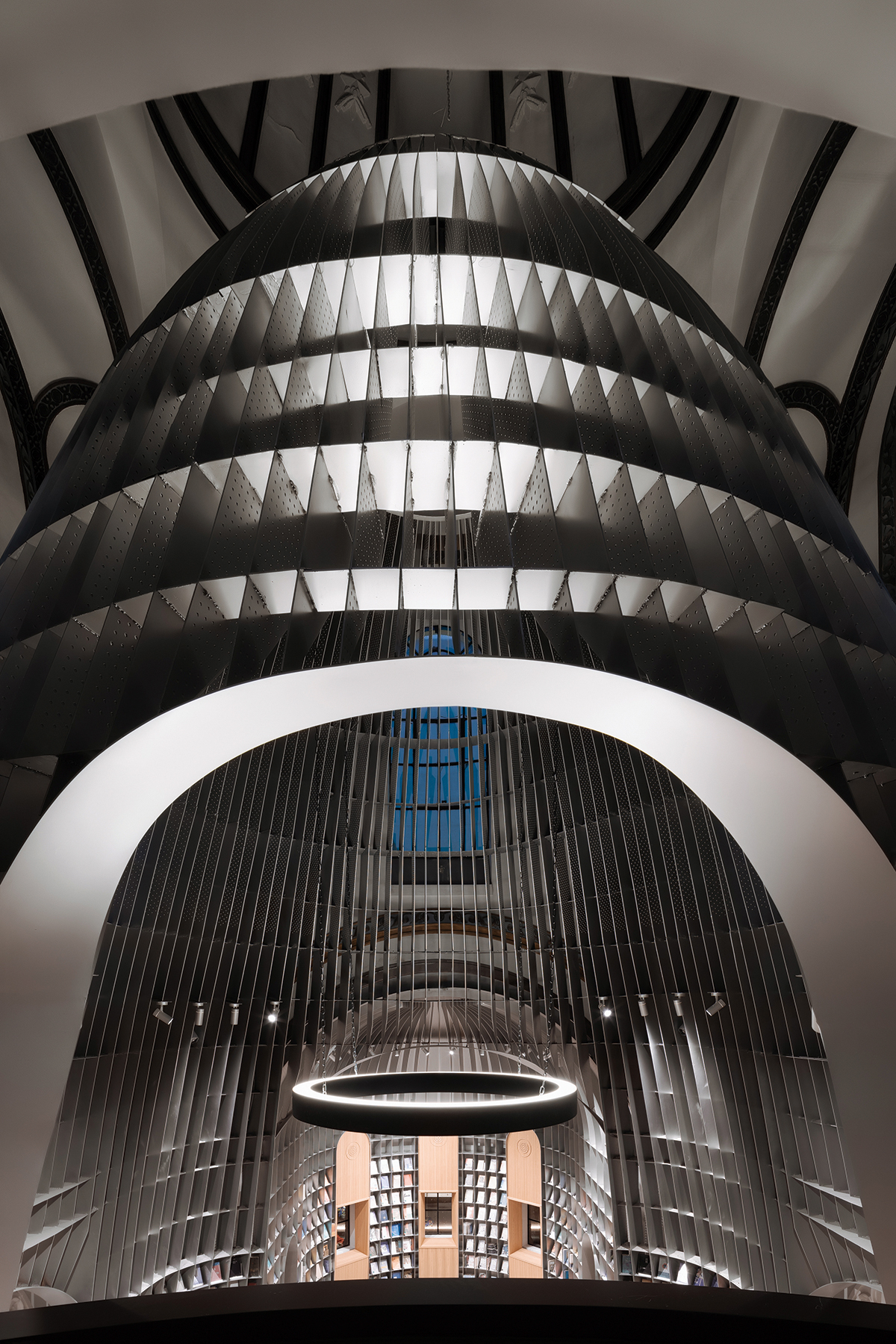 On the day of completion, I walked up the spiral staircase shrouded in blue light. I stood in front of the pulpit and whispered my own sentence, “I love poetry, and I use it to create the world.” The Sinan Books poetry store I designed is a gift “For the infinite few” (Jiménez). It is the soul of Shanghai. “Poetry is connate with the origin of man.” – Shelley 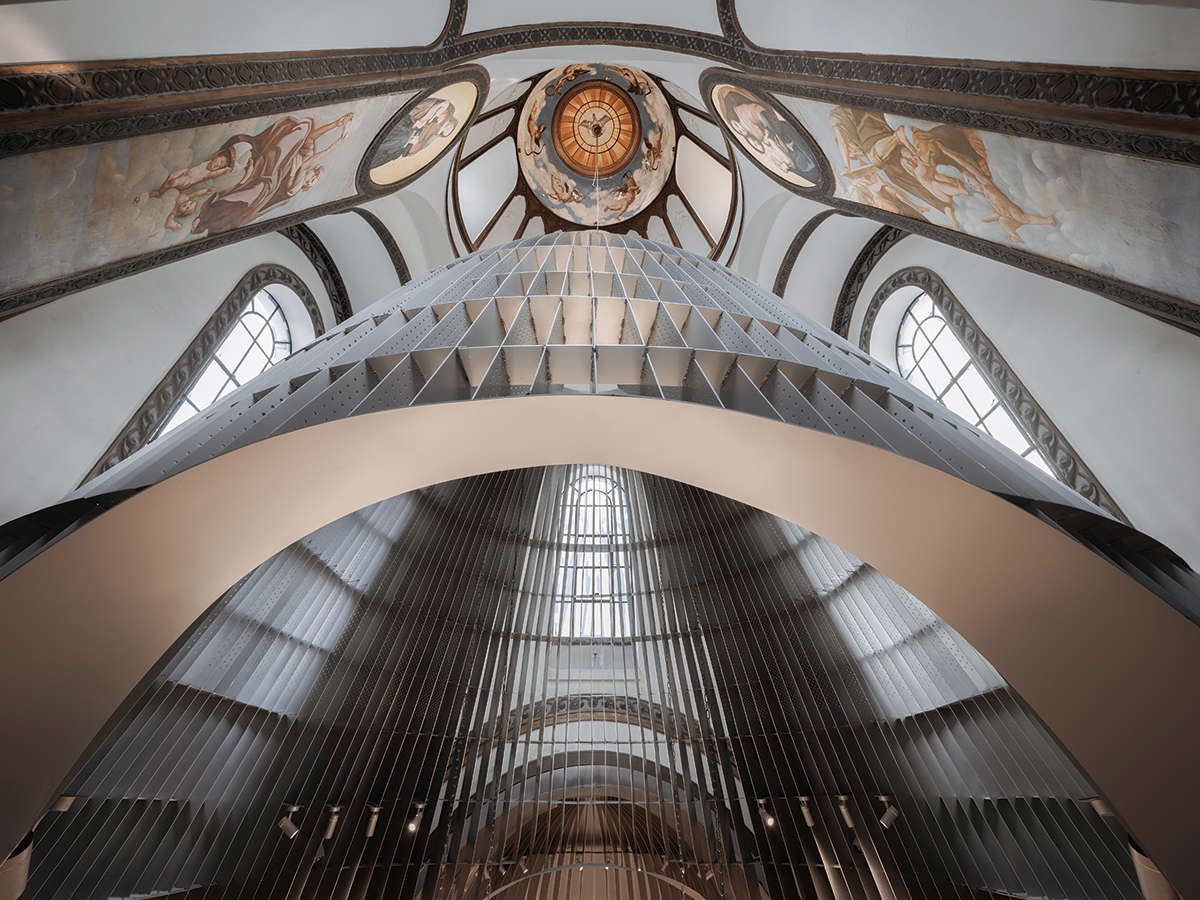 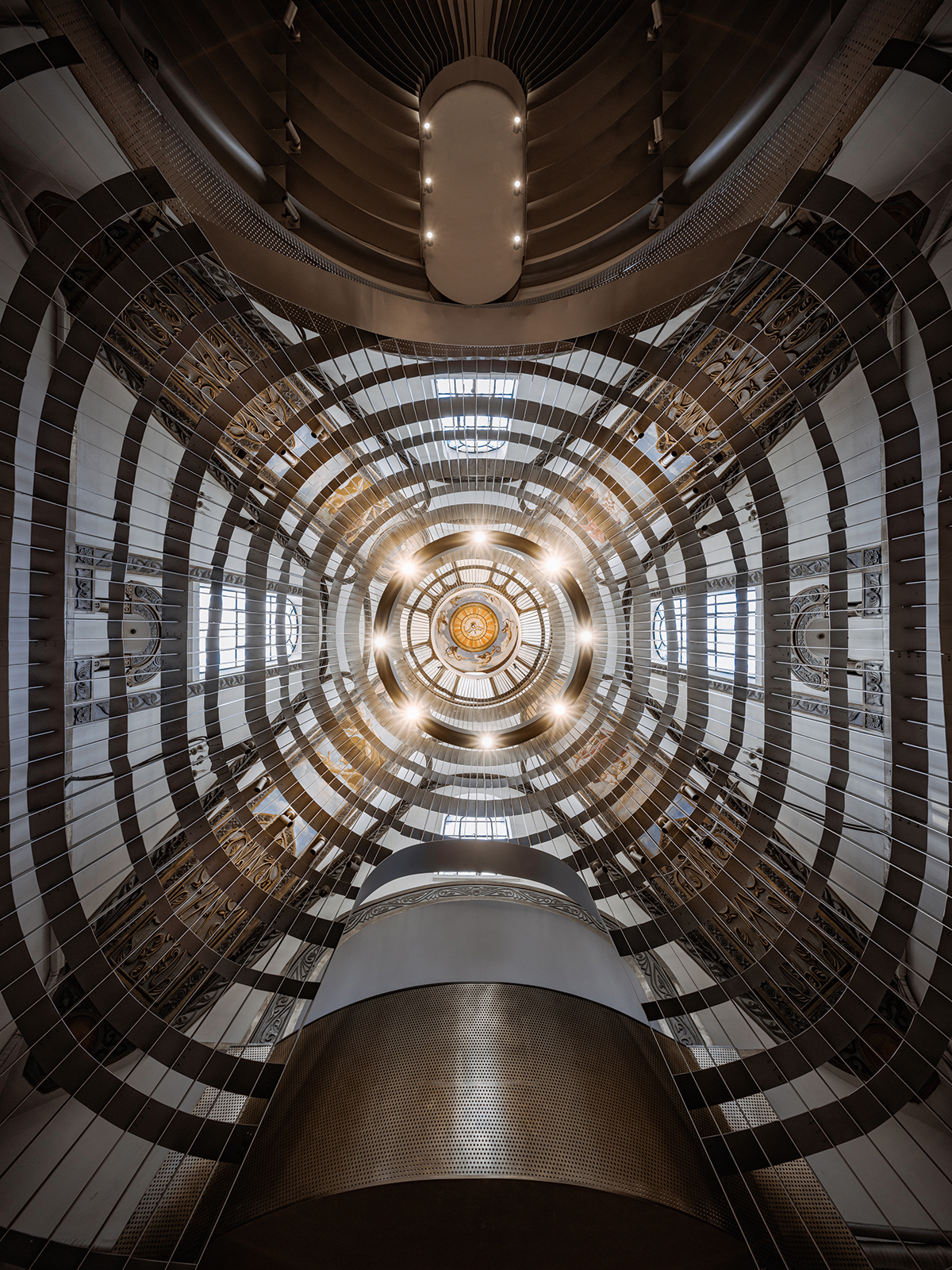