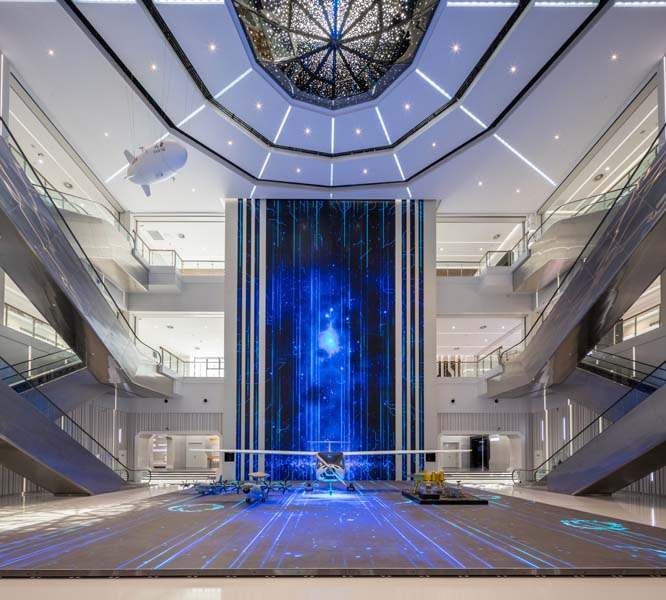 Innovation lies in the gene of Anhui people and is the golden sign of Anhui Province. Anhui Innovation Museum, located at the southernmost tip of Binhu New District, Hefei City, Anhui Province, faces the 800 square kilometers of Chaohu Lake and covers an area of 150 acres, including a construction area of 82,000 square meters. The entire museum is composed of three independent venues to form a circular functional chain of “aggregate display, capture search, research and development transformation” with scientific and technological achievements transformation and trading as the core. As China’s first museum with innovation as its theme, Anhui Innovation Museum will become an important base and pivot for the construction of the province’s innovation system, a platform to display major innovation achievements, and an international high-end innovation and wisdom space in the future. 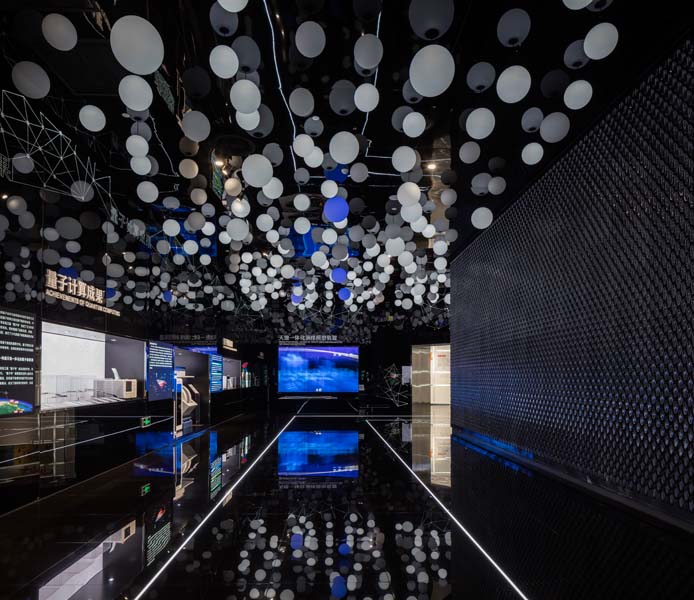 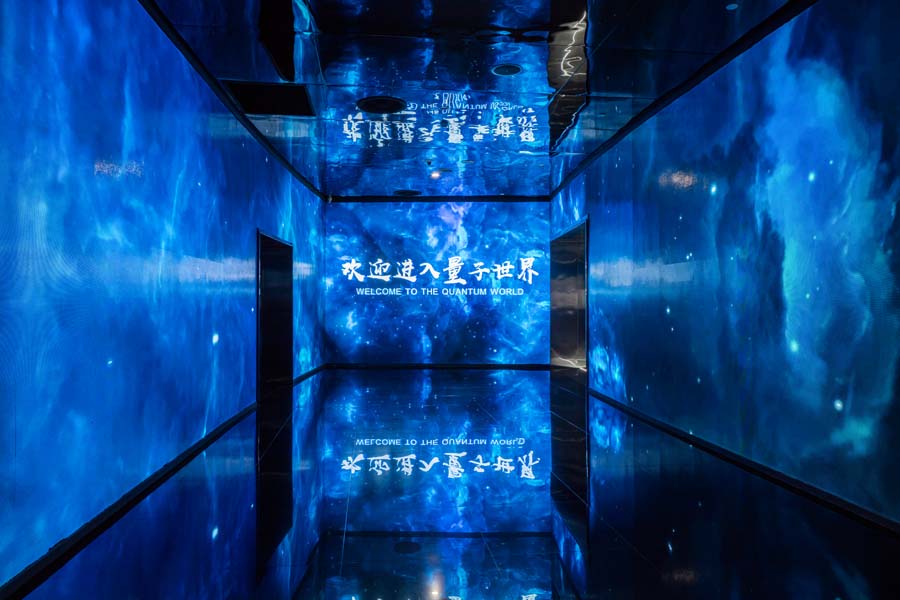 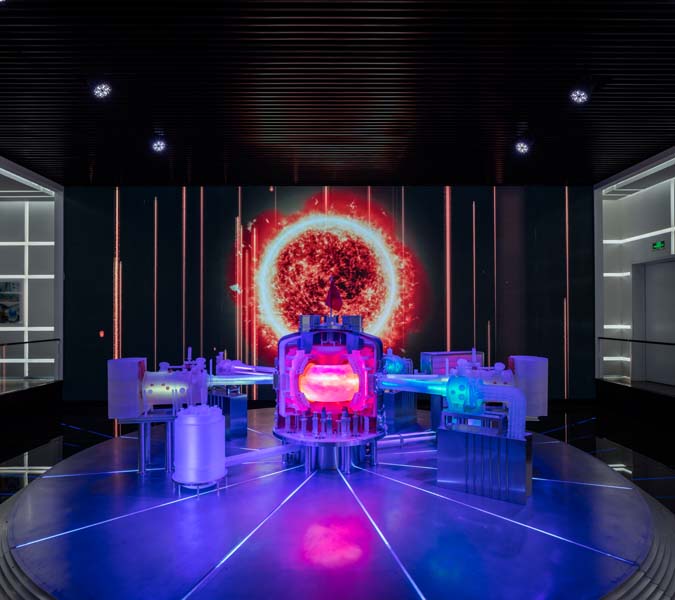 The No. 1 Building of Innovation Hall, which covers a total construction area of about 22,000 ㎡ and a layout area of about 14,000 ㎡, mainly serves as the “display window”. In the three-floor exhibition space, three chapters of “Creating Engine, Creating Wisdom, and Creating the Future” were set up to interpret the vivid story of “Innovative Anhui” from top-level design to transformation and then the realization of sustainable development. From “humanoid doublefooted
rescue robots” to “container-type of plant factories”, the museum displays more than a thousand pieces of science and technology exhibits, involving strategic emerging industries such as “information technology, high-end equipment, energy conservation and environmental protection”. These can substantially broaden audiences’ horizons and make them truly feel the innovative vitality of Anhui Province. 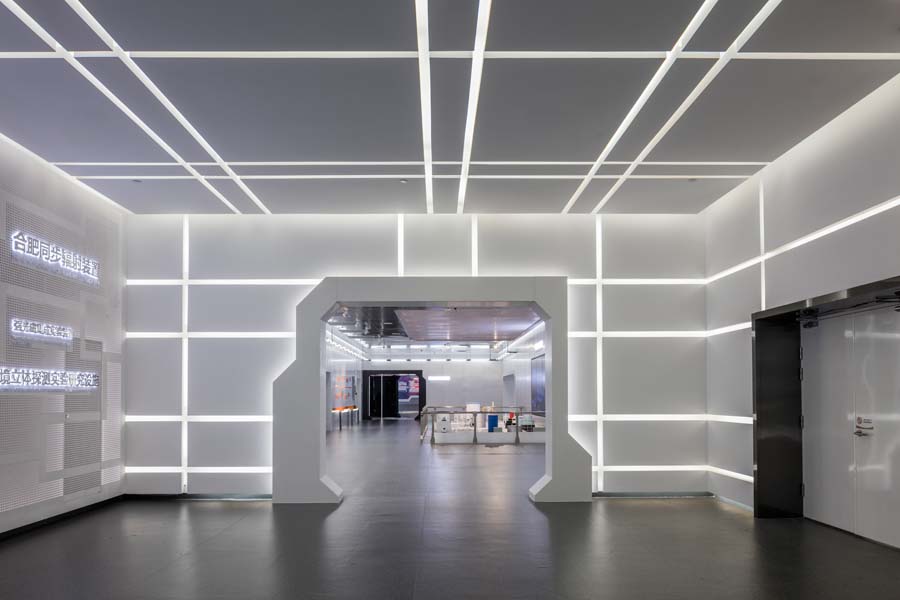 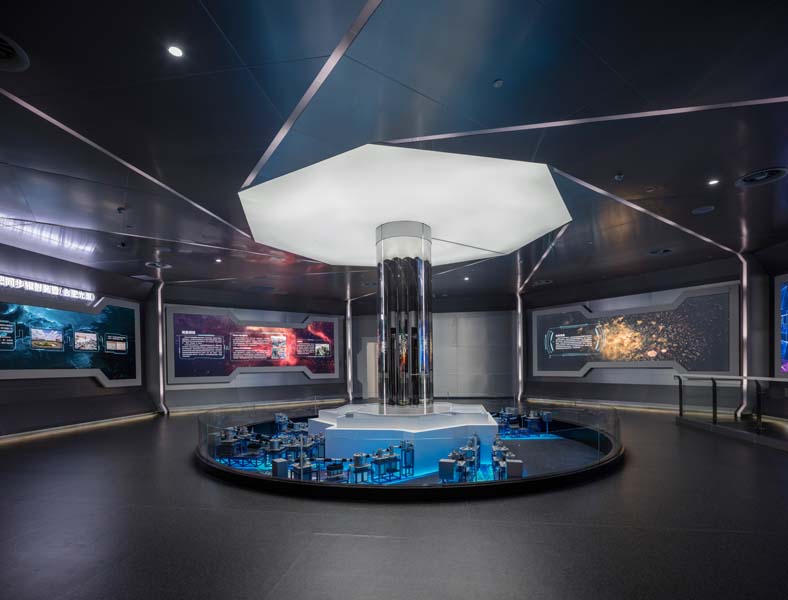 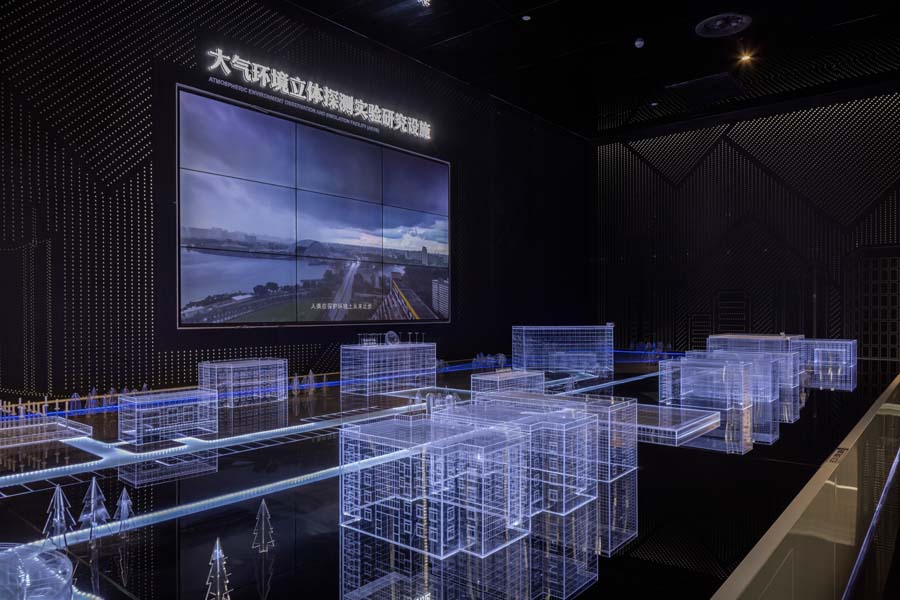 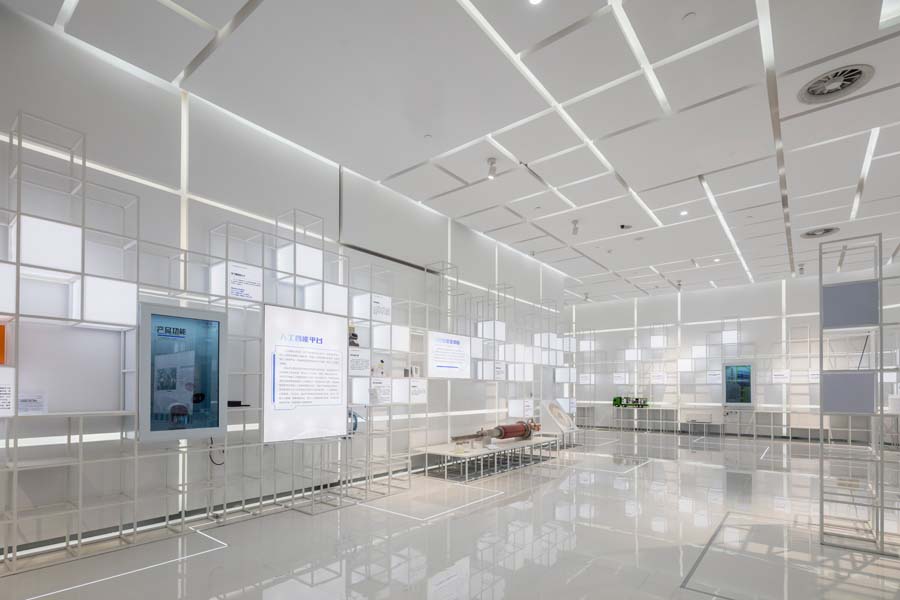 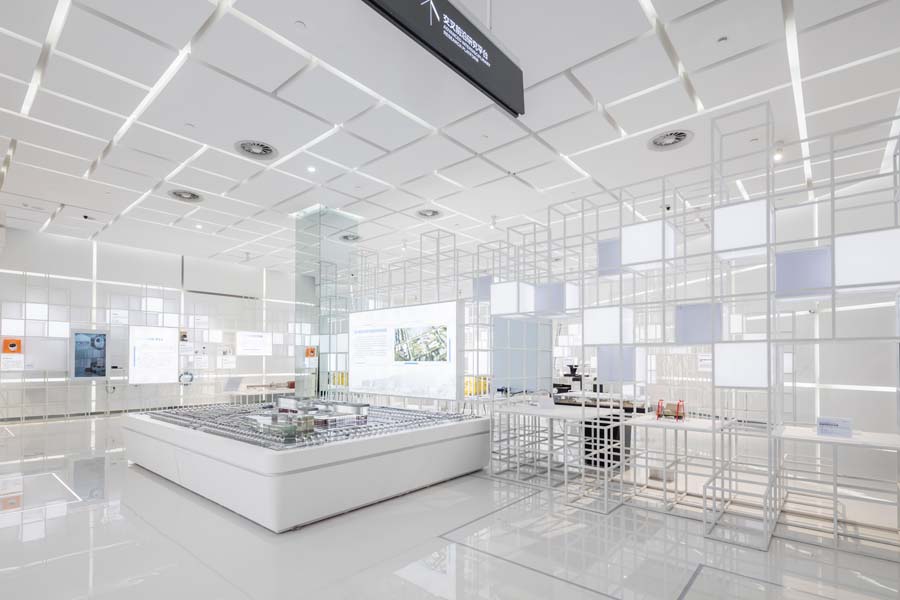 Innovation in Anhui Giant Screen with Light and Shadow. The designer makes full use of the high space of the atrium to set up the “Innovation in Anhui” light and shadow device show, bringing a strong visual impact and soul shock to the audience. The audience can step onto the dazzling floor tiles to light up the innovation engine, with the chairman’s innovative message sounding around.
Meanwhile, the front and the big screen will be instantly opened, leading the audience to fully understand innovation stories in Anhui Province. The “Innovation Time Hourglass” at the top connects the “QUESS” satellite, “Wukong” dark matter detection satellite, the stratospheric airship, the diamond plane and other floating devices in series. And it interacts with the front ice screen, combining the virtual effect with reality and highlighting the concept of innovation and the achievements made in Anhui Province. 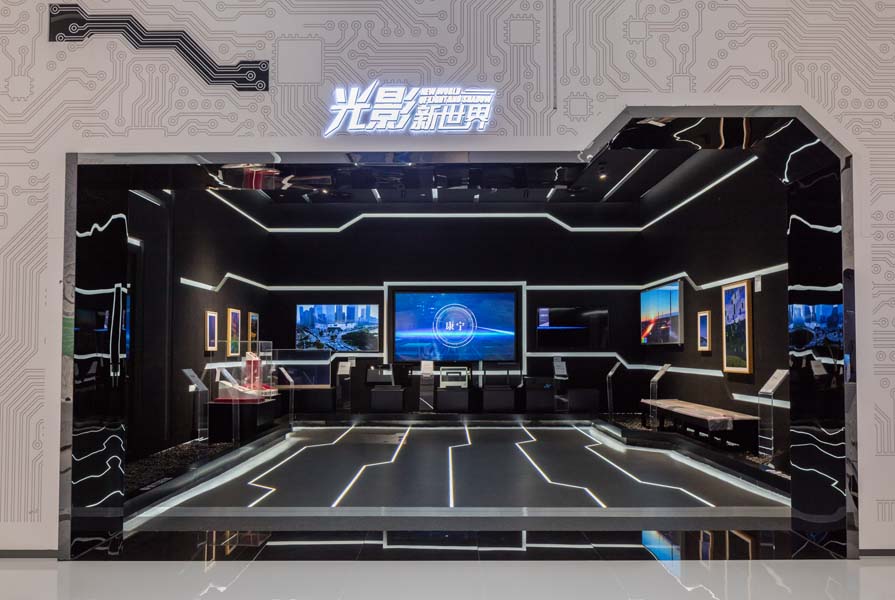 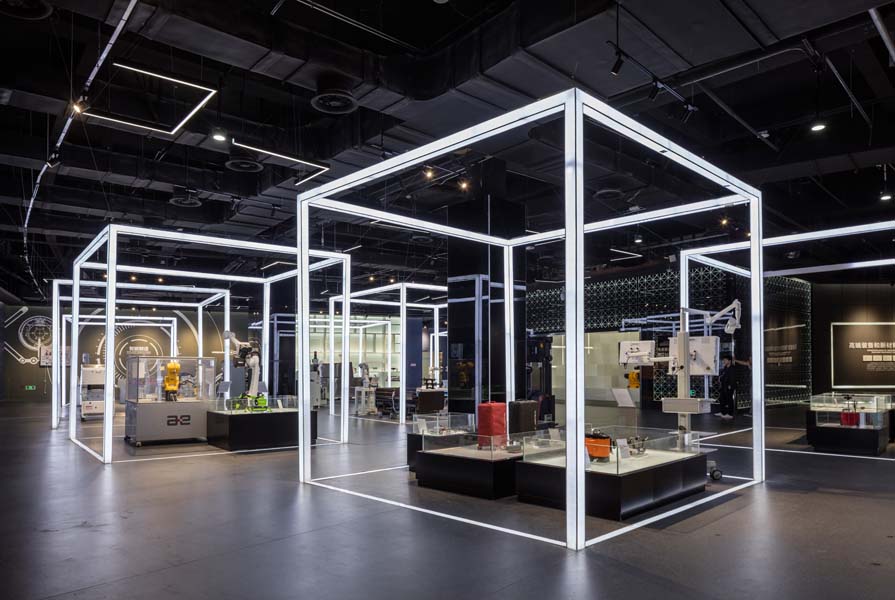 Chuang Lifang Innovation Digital Sandbox. The bright light has lit up the 140,000-squarekilometer land between the Yangtze River and the Huai River, outlining the “2+8+N+3” innovation system. The 3D representation vividly represents the overview, history and achievements of the “Comprehensive National Science Center”. Meanwhile, it can also be transformed into “Innovation in Anhui·Big Data Center”, interactively displaying data resources such as key laboratories in Anhui; and through visualization, it can analyze current innovation construction in Anhui Province at various aspects. Quantum Box Immersive Experience Theater. QUESS, the world’s first scientific experiment satellite, has already made us have a bird view of the universe. Walking into the exhibition area, audience can turn on the digital image interpretation by randomly accessing the quantum key to get to know the cutting-edge achievements made in Anhui in quantum communication, quantum computing and quantum measurement. 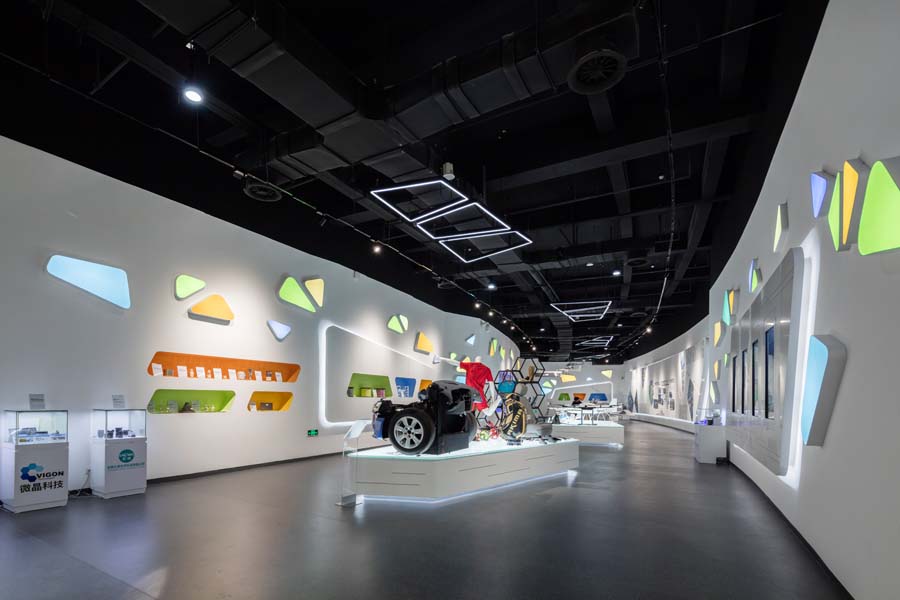 Through the dynamic interpretation of the photoelectric model, audience can view the working principle and operation steps of the full superconducting tokamak, especially the two outstanding achievements, namely “the successful achievement of ultra-high temperature long pulse plasma discharge with an electron temperature of more than 50 million degrees and a duration of 102 seconds in February 2016” and “the 100 million degrees of operation in the plasma center for the first time in August 2018”. The designer makes full use of the building’s high space to set up the “Innovation Space” intelligent product display space on the third floor, perfectly combining technologies and art. “Well Robot” produced by Harbin Institute of Technology is used as guide leading audiences to travel across time and see what Anhui Province will be look like by 2035. 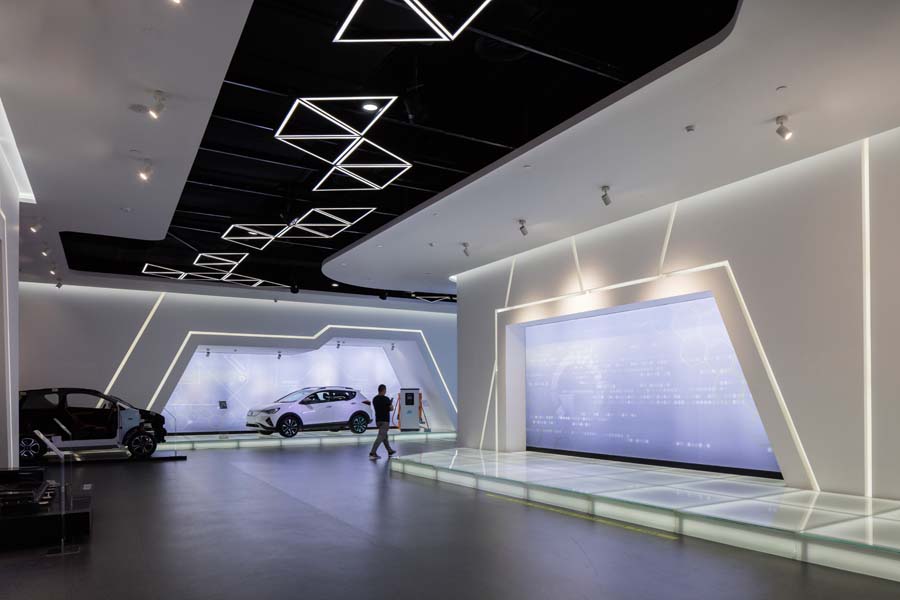 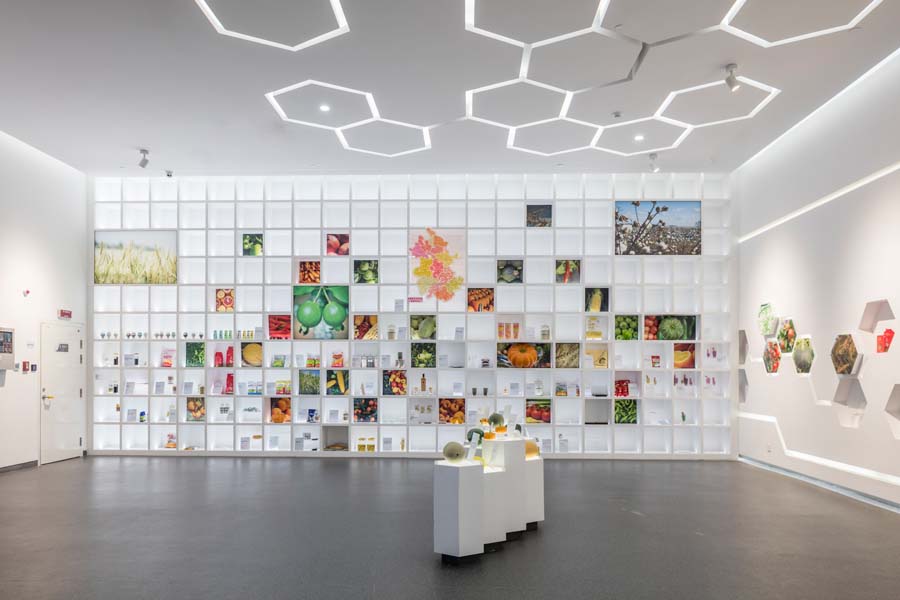 Eternity Transition Super-light Speed Flight to the Future. Taking the magic “QUESS” space ship, audiences can fly into the untouched and mysterious spatial and temporal realm. The superconducting Tokamak has solved the ultimate energy problem for mankind; distributed robots have become the absolute protagonists in the factory; flying cars have made the city less crowded; super high-speed rails have made the world no longer out of reach. 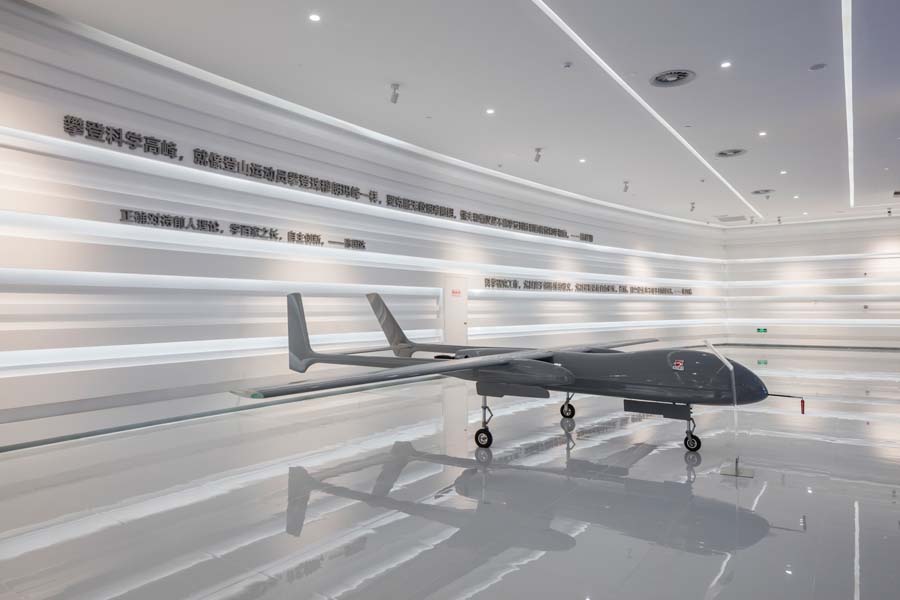 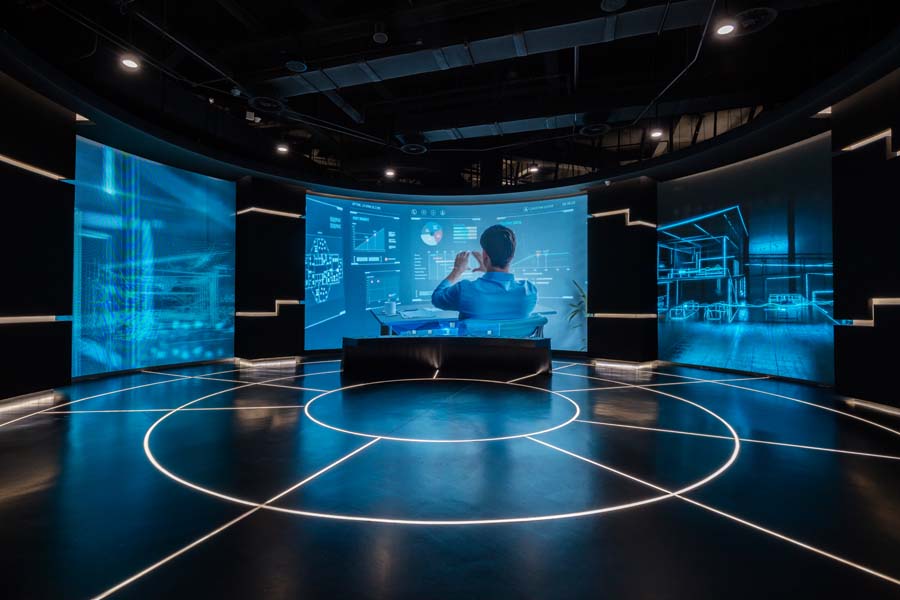